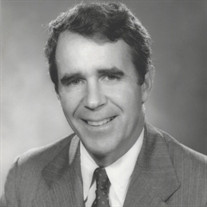 Michael “Mike” McDonnell October 10, 1939 – September 17, 2021 Mike McDonnell was born in Memphis on October 10, 1939 to Walter and Irene McDonnell. He attended Webb School in Bell Buckle, TN and received his BA from Yale University. After several years in the U.S. Navy, Mike returned to Memphis before taking a job at Little Rock Furniture Company. In February of 1965, he married Mary “Bickie” McCallum. They were married for 54 years until her death in 2019. In the early 1970’s, Mike purchased Jordan Companies followed by the purchase of Orgill Brothers a few years later with is best friend and business partner, Joe Orgill. In the early 1990’s, Mike purchased Macaroy Company followed by Sugar Service and Sweetex. Mike always considered himself extremely blessed to have worked with so many outstanding people. As much as Mike enjoyed business, he definitely “worked to live” not “lived to work”. He spent summers in Charlevoix, MI and winters in Delray Beach, FL. Mike was an extremely competitive person, never more so than on the golf course. In fact, it was never clear whether being his partner was a blessing or a curse. He was also a lifelong baseball fan and a walking encyclopedia of obscure baseball statistics. In 1996, he was thrilled to become a minority owner of the St. Louis Cardinals. Mike was an early supporter of Shelby Farms Conservancy and was a Shelby Farm Commissioner. Most of his charitable giving centered around education. He supported the Memphis Opportunity Scholarship Trust (MOST), Rhodes College, and the University of Mississippi, St. Mary’s Episcopal School and the Memphis College of Art. As Mike’s health declined over the last four years, he continued to work as hard as he could to overcome his ailments. His physical training sessions with Gee Sharp were one of the highlights of his week. They became great friends and the family is thankful for the joy Gee brought to his life. Mike was predeceased by his wife Bickie McDonnell, his parents, his brother McNeal McDonnell and his sister Irene Hill. He is survived by his brother Jim McDonnell (Missie), his son McNeal McDonnell (Pam), his daughters Irene Ayotte (Ron) and Mary Schell (Ryan) as well his grandchildren Mary, Robert, Andrew, Mike, Baker, Hays and Kate. Services are scheduled for Tuesday, September 21 at Church of the Holy Communion. Visitation will begin at 10:15am followed by the funeral service at 11:00am. The burial will take place at Polk Cemetery in Bolivar, TN immediately following the service. The family wishes to thank Aretha Franklin, Gaye Walters, and Estrella Moulin for their loving care. The family requests that donations be sent to MOST (1000 Ridgeway Loop Road, Suite 205, Memphis, TN 38117).

The family of Michael "Mike" McDonnell created this Life Tributes page to make it easy to share your memories.

Send flowers to the McDonnell family.