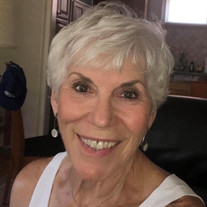 Miriam Davis Grossman, known to her friends as “Mimi,” a beloved mother, grandmother, sister, and wife, passed away peacefully in her home on October 2, 2021. Mimi was born on February 20, 1946 in Louisville, Kentucky, the daughter of Faye and Simmy Davis. She entered a world filled with laughter and love alongside her older brother, Mel, and her older sister, Diane. After an athletic-filled and Judaism-centered childhood, Mimi attended University of Wisconsin, Madison, then moved to Chicago where she earned a Master’s in English at DePaul University and then began teaching high school English. Mimi married her husband, Ronald Kenneth, in 1972, and they moved from Chicago to Memphis in 1976 with their sons Robert and David. Their daughter, Lauren, was born a few years later, creating the family structure that Mimi nurtured throughout her life. Mimi was preceded in death by Ron in January 2013. After teaching high school English, Mimi transitioned to college counseling. She guided thousands of high school students as they navigated the college admission process, first at White Station High School and then for 20 years at St. Mary’s Episcopal School. In addition to counseling students and their parents, Mimi assumed countless leadership roles with the National Association of College Admissions Counselors. She similarly served on many advisory boards at universities, the National Merit Scholarship Association, and the Community Foundation of Greater Memphis. Alongside her professional endeavors, Mimi devoted hours to her community, serving on boards with Facing History and Ourselves, Beth Sholom Synagogue, Memphis Jewish Federation, and the Memphis Jewish Community Center. After Mimi retired from her role as Director of College Counseling at St. Mary’s, she continued to do what she loved: spending time with her friends and family, running, traveling, helping others, and making the most of every moment. She was blessed to be able to do these things with her companion, Alvin Franklin, for the final 8 years of her life. Mimi is survived by her children, Robert (Kimberly), David (Lauren), and Lauren, her grandchildren Jaryd, Ezra, and Arlo, and her siblings Diane (Jim) and Mel (Shellia), many cousins, nieces and nephews. Mimi’s funeral is being held at Beth Sholom Memorial Gardens (2265 Pate Road, Memphis, TN, 38133) on Monday, October 4, at 3pm. Gifts may be made to the Mimi Grossman Memorial Fund at the Jewish Foundation of Memphis (6560 Poplar Avenue, Germantown, TN, 38138, www.jcpmemphis.org/foundation) or the charity of the donor’s choice.

Miriam Davis Grossman, known to her friends as &#8220;Mimi,&#8221; a beloved mother, grandmother, sister, and wife, passed away peacefully in her home on October 2, 2021. Mimi was born on February 20, 1946 in Louisville, Kentucky, the daughter... View Obituary & Service Information

The family of Miriam “Mimi” Davis Grossman created this Life Tributes page to make it easy to share your memories.

Miriam Davis Grossman, known to her friends as “Mimi,” a beloved...

Send flowers to the Grossman family.