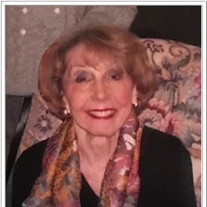 Miriam Horne Northrop, 95, died Sunday, March 22, 2020. Born in Lucedale, MS, she was the daughter of Mr. and Mrs. Robert Elton Horne. Miriam graduated from Demonstration High School on the campus of Southern Mississippi University in Hattiesburg, MS. In 1946, she graduated from the University of Mississippi where she was president of Kappa Delta sorority, a member of Mortar Board, named to the Ole Miss Hall of Fame, and the first female editor of the campus newspaper, The Daily Mississippian. This experience prepared her for her future career at The Commercial Appeal where she met Guy Northrop, her future husband and eventual editor of the editorial page and art critic. The decades following their marriage were full of rearing children, volunteering, gardening, renovating homes, entertaining, studying literature and art, nurturing dear friendships, and being a dedicated member of St. Mary’s Episcopal Cathedral. Following Guy’s death, Miriam became the executive director of the Memphis and Shelby County unit of the American Cancer Society until her retirement. She remained active in organizations dear to her: the Woman’s Exchange, Les Passees, the Memphis Book Club, and Our Home & Garden Club. Mrs. Northrop was preceded in death by her husband, Guy S. Northrop, Jr.; her parents; her brothers, Robert Elton Horne, Jr., John Grantham Horne, Michael Allen Horne; her sister Patsy Horne Robinson; and her grandson Robert Grantham Hill. She is survived by her daughters Robin Hill (Don) Mimi McDugle (Ed); her grandchildren Andrew Hill (Brandi), Betsy Hill, Robin Butler (Brad), Clifton McDugle (Courtney Rodman); her great-grandsons Zach and Shepard. A family-only graveside burial service will be Wednesday, March 25 followed by a memorial service to be held at a later date. In lieu of flowers, the family requests that memorials be made to St. Mary’s Episcopal Cathedral, 700 Poplar Avenue, Memphis, TN 38105, or a charity of the donor’s choice.

The family of Miriam Horne Northrop created this Life Tributes page to make it easy to share your memories.

Send flowers to the Northrop family.