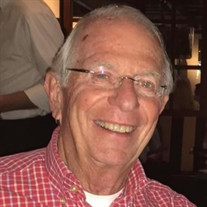 Myron Lewis, age 84, of Memphis, passed away on April 9, 2022 surrounded by his wife of 58 years, Gail, and his three daughters. He was a native of Memphis, TN and was born on October 16, 1937 at Baptist Memorial Hospital. He went to Bruce School and Central High School, graduating in the class of 1955. He was a 1959 graduate of Dartmouth College where he received his bachelor’s degree Magna Cum Laude and Phi Beta Kappa. Following graduation, he earned his M.D. degree at Columbia University’s College of Physicians and Surgeons in New York City as a student in the class of 1963. He did his internship and first year residency at Vanderbilt University Medical Center and completed his residency and gastroenterology training at the Cornell Bellevue Division of Memorial Sloan Kettering. Prior to returning to Memphis, he spent two years in the U.S. Public Health Service stationed in Louisville, Kentucky. He joined the staff at Baptist Memorial Hospital in 1970 and remained there until he retired. He served as Chief of Staff at Baptist Memorial Hospital in 1985. He was most proud of his time as President of the National American College of Gastroenterology from 1987-1988 where he developed close friendships with gastroenterologists from all over the country. He was an Associate Professor of Medicine at the University of Tennessee and was Co-Director of the Gastrointestinal Laboratory at Baptist Memorial Hospital. He became a Master of the American College of Gastroenterology in October of 1992. He was one of the first twelve physicians nationally to receive this honor. He served on the editorial board of the Journal of Gastroenterology and was selected many times by his peers as one of the “Best Doctors in America”. In addition to his professional accomplishments, he volunteered as a physician at Church Health, which he continued to do even after his retirement. He was also a member of the Germantown Rotary and a former board member of Opera Memphis. He loved his time on the tennis court, watching the Memphis Tigers play basketball, and traveling. The beach in Florida was his favorite vacation spot. He was a devoted husband and father, always putting his family first. He leaves behind his wife Gail, and his three daughters, Robin Wallace and her husband Jeff, Tracey Lewis, and Joelle Rogin. He is also survived by his four grandchildren, Jordan Wallace, Connor Wallace, Wallis Rogin, and Evans Rogin. He will be laid to rest at the Temple Israel Cemetery next to his son, Jeffrey Todd Lewis. Services are scheduled for Tuesday, April 12th at 10am at the Levy-Cooper Chapel at the Temple Israel Cemetery, 1708 Hernando Road, Memphis, Tennessee 38106. The family wishes to thank Shay Roberson for her loving care. Memorial donations may be sent to Temple Israel, Church Health, or the charity of one’s choice.

Myron Lewis, age 84, of Memphis, passed away on April 9, 2022 surrounded by his wife of 58 years, Gail, and his three daughters. He was a native of Memphis, TN and was born on October 16, 1937 at Baptist Memorial Hospital. He went to Bruce... View Obituary & Service Information

The family of Dr. Myron Lewis created this Life Tributes page to make it easy to share your memories.

Send flowers to the Lewis family.