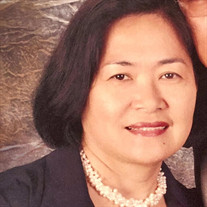 It is with great joy that we celebrate the life, and with deep sadness that we acknowledge the closing of this chapter of life for Norma Millan Zalamea. Born in 1949, raised in Bulacan Philippines, she grew up surrounded by her loving brothers, Leopoldo Jr, Roger, Ben and Gregorio, her parents Leopoldo and Socorro, and countless loving neighbors in Tomas Manuel Subdivision. Raised in a setting of love and grounded in family values, Norma grew to be a sensitive but strong young woman, fond of the Beatles and the Rolling Stones, and of dancing. Her education and strong academics led her to study nursing at San Juan De Dios nursing school in Manila, where she met, and retains some of her closest sisters for life. Despite breaking the occasional rule and sneaking through the hallways after hours on occasion, she graduated and she and several of her nursing class were ultimately recruited to Memphis to join the staff at the then City of Memphis Hospital. As part of this class, she was introduced to the land of Elvis, soul and southern cooking. During this incredible time, Norma enjoyed going out with colleagues to area clubs, dancing to Al Green, and enjoyed her first date with her future life-long love RENATO “Noli” Zalamea, at the Arcade Restaurant in downtown Memphis. Over time, Noli and Norma courted then married in 1974, and welcomed their first child, Roderick “Ricky” Millan Zalamea in 1975. With the help of her nursing sisters from San Juan De Dios, Noli and Norma raised Ricky from their home on Coral Drive in Frayser while Noli finished CRNA School at Charity Hospital in New Orleans. It was also during this time that Norma enjoyed working at Tobey Children’s Hospital, in the newborn center, with Dr. Korones, caring for some of the most vulnerable babies in the city. They then welcomed their second child, Nia Noelle Millan Zalamea in 1978 after transitioning to St Joseph Hospital. Norma enjoyed her young family while working at Saint Joseph Hospital in Memphis, often times celebrating birthdays, anniversaries, or other life events, at the hospital while Noli was on call. These remain some of the most joyous memories for the whole family and likely played a role in exposing the kids early on to a life of service through medicine, as Ricky went on to matriculate at University of Notre Dame then UT Health Science Center for medical school, training to ultimately become a Cardiothoracic Radiologist. In a similar vein, Nia attended the University of Virginia then East Tennessee State University for medical school ultimately to serve as a General Surgeon. Though not planned, the common ground of the medical field served to bring the family together around service to the poor, which began in 1998 with Noli’s first trip to Guyana, and in 1999 with their first joint venture to the Philippines. What was initially thought to be a one time service project became a non profit and core life change for the whole family, called Memphis Mission of Mercy. For the next 20 years, Noli and Norma, working together alongside passionate medical and non-medical people interested in serving the poor, successfully managed to deliver over $17 million worth of free medical and surgical care to the poor all over the Philippines. Through this process, there have been many adopted members of the mission family, many of whom continue to serve with Memphis Mission of Mercy. During these 20 years, Norma led the mission and all of its volunteers, in learning how to love with joy and integrity. Not one to shy away from speaking up, she advocated for what is right always, and in detail, and it was in this way that her Christlike manner was most visible. It was not enough to offer a free operation, unless it was accompanied by the assurance that the family had enough food on the table, the means to provide a roof and a safe place in which to rest. Much in the way Christ sees us as special and unique, she loved each family and patient with specificity and care. Norma and Noli have been blessed to see both of their children marry, Ricky with Cindy, and Nia with Matt, and have enjoyed welcoming their dear grandchildren Ian, Quinn and Charlie (from Ricky and Cindy) and Thomas (from Nia and Matt) and by the time of this writing, would have welcomed from heaven the birth of her newborn grandchild from Nia and Matt. After four years of bravely battling a metastatic breast cancer recurrence, Norma chose to spend her last four months with us in this life with a focus on comfort and dignity with family at home. She passed peacefully on to our Lord’s loving arms at 4:50pm May 1st. This journey through hospice has been a source of comfort, a memory of joyous occasions and solace. We have shared some of our happiest most treasured moments while working alongside our mission family, and we all look forward to serving again. We humbly ask for your prayers, that Norma rest peacefully and joyfully in her heavenly reunion, and for all of us here, as we ground ourselves in Christ and with the support of each other. Visitation will be Wednesday May 5th, 4-6pm, at Canale Funeral Directors. Funeral Mass will be Thursday, May 6th, 12:30 pm, at St Ann Catholic Church with Calvary Cemetery immediately to follow. For the services, social distancing and masking will be required, and we ask that those who are vulnerable and/or unable to be vaccinated, please attend virtually. https://m.facebook.com/groups/MemphisMissionOfMercy/?ref=bookmarks In lieu of flowers, in accordance with Norma’s most fervent wish for us to continue our charitable work, she has requested that donations be made to Memphis Mission of Mercy at 3995 Loch Meade Drive, Lakeland TN 38002 or online at memphismission.org Memphis Mission of Mercy is a 501(c) 3 organization and all donations will be acknowledged with a receipt for tax purposes

It is with great joy that we celebrate the life, and with deep sadness that we acknowledge the closing of this chapter of life for Norma Millan Zalamea. Born in 1949, raised in Bulacan Philippines, she grew up surrounded by her loving brothers,... View Obituary & Service Information

The family of Norma Millan Zalamea created this Life Tributes page to make it easy to share your memories.

It is with great joy that we celebrate the life, and with deep...

Send flowers to the Zalamea family.