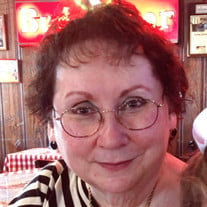 Patricia Davis Snow, 69, of Bartlett, died December 12, 2019. Pat was born on October 25, 1950 to Charles and Mayrie Davis. She graduated from East High School where she attended kindergarten through twelfth grade and in 2018, she celebrated her 50th anniversary from High School. Pat attended and graduated from Bob Jones university where she received a BS in Business Administration. After returning to Memphis, Pat worked at Orgill Brothers and then GE Medical, MRI and Sales Support Division. Pat then became a legal secretary and worked at several Memphis law firms over the years. During her years as a legal secretary, Pat also pursued a paralegal education at the University of Memphis. Pat eventually became the office manager at a couple of law firms and retired in 2015. Pat married Spencer Law Snow, Sr. on December 21, 1973. Pat was active in as an Assistant Den Leader in The Cub Scouts. Pat then passed the Scouting duties to Spencer who spent a few years in The Boy Scouts Of America. Upon learning that she was about to become a Grandmother, Pat renewed her love of sewing and delighted in making things for her granddaughters. Pat was also Mama to many loved animals throughout her life. Pat was preceded in death by her father and mother; a sister, Beverly Charle Davis as well as aunts, uncles, cousins, and grandparents. She is survived by her husband Spencer Law Snow, Sr., her son, Spencer Law Snow, Jr., her daughter, Adair Snow, her sister Helen Davis and daughter-in-law Stephanie Snow. She is also survived by 2 granddaughters, Maggie Snow and Anne Law Snow; her cousins, Charlotte Rowell Bowman and family, Pamela Rowell Lee and family and Lisa Rowell Yeldell and family. Visitation will be 5-7 p.m. Tuesday, December 17, 2019 at Canale Funeral Directors, 2700 Union Avenue Extended, Memphis, 38112. Funeral service will be 1:00 p.m. Wednesday, December 18, 2019 at Canale Funeral Directors. Burial will be in Forest Hill Midtown Cemetery.

Patricia Davis Snow, 69, of Bartlett, died December 12, 2019. Pat was born on October 25, 1950 to Charles and Mayrie Davis. She graduated from East High School where she attended kindergarten through twelfth grade and in 2018, she celebrated... View Obituary & Service Information

The family of Patricia Davis Snow created this Life Tributes page to make it easy to share your memories.

Send flowers to the Snow family.