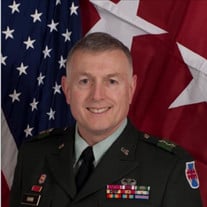 Major General Paul Frederick Hamm (Retired) passed away on January 25, 2021, after a long and courageous battle with complications from Parkinson’s Disease. He fought the disease with dignity and without complaint. Paul, age 69, was married for 39 years to his best friend and beloved wife, Carol Buchignani Hamm. In addition to his wife he is survived by his daughter Ashley Caton Hamm , his son Andrew Paul Hamm, his stepdaughter Gwen Follis Driscoll (Michael) and their daughter Lucy Driscoll, his sister Mary Elissa Eskew (Eddie) and their daughter Catie Eskew, and numerous cousins. Paul was preceded in death by his parents, Joseph Frederick and Ruth Caton Hamm, and his stepson John (Tripp) Follis III. His enduring legacy is 38 years of faithful and honorable service in the U.S. Army. Paul served 7 years on active duty and 31 years in the U.S. Army Reserve. He commanded units at all levels from Platoon Leader to 2-star Command. A native of Maryland, Paul graduated from Bowie High School in Bowie, Maryland in 1969. He earned his commission upon graduation from the U.S. Military Academy in West Point, New York, in 1973 with a Bachelor of Science Degree. He graduated with a Master’s Degree in Business Adminis-tration at Memphis State University in 1981. He received a second Master’s Degree from the Army War College. He began his military career with the 1st Engineer Battalion, 1st Infantry Division (Forward) in Germany during the Cold War, where he served in company-level positions and in the G-3 Training Office. He returned to the United States in 1977 and received orders to report to the Memphis District of the U.S. Army Corps of Engineers as a Project Officer and later as the Deputy District Engineer. This is how he got to Memphis. Upon arrival, Paul liked what he saw, and decided to leave the Regular Army and live in Memphis. He met the love of his life when they took classes together at Memphis State. He took an Army Reserve commission and the remainder of his assignments were with the Army Reserve. He served with the 3291st USARF School, 467th Engineer Battalion, and the 353rd Engineer Group. He was the Chief of Staff of the 90th Regional Support Command in Little Rock. He also served as the Engineer for the Eighth U.S. Army in South Korea. Upon selection as a General Officer, Paul was assigned to the 412th Theater Engineer Command located in Vicksburg, Mississippi, where he served as the Deputy, and later as the Commanding General. This was his final assignment, and he retired from the Army in October of 2011. Of his many military awards, he was especially proud of the Distinguished Service Medal and four Legions of Merit. He was also awarded the Silver de Fleury Medal which recognizes excellence in engineering. Those serving in the Reserves or Guard typically have a civilian job as well. Upon leaving the active Army, Paul partnered with Bob and Lucia Lockridge to form Lockridge & Associates, Inc., which provided construction man¬agement services for large projects. Paul was there for 15 years, and then was hired with Lurgi PSI in Memphis. He was a Construction Manager for several very large agricultural processing plants. Paul left Lurgi PSI, and took a job with the federal government, where he served as a Professional Engineer and Project Manager with the Memphis District, U.S. Army Corps of Engineers. He retired from the federal government in October of 2014. He always enjoyed his work, particularly with the people. Paul was a man of faith, and was a member of St. Louis Catholic Church initially, and then moved to the Cathedral of the Immaculate Conception. He was an avid runner, and took pride in always scoring the maximum grade for the Army Physical Fitness Test. He loved to travel and to read. He enjoyed music and sports especially baseball. Honoring his wishes, Paul will be laid to rest at the West Tennessee State Veterans Cemetery. In Memphis, a Funeral Mass celebrating his life will be held at The Cathedral of the Immaculate Conception at 11:00 a.m. on Saturday, January 30, 2021. Visitation will begin at 10 a.m. at the church. In lieu of flowers, memorials may be sent to the Parkinson’s Disease Foundation, The Gift to Mary Fund at the Cathedral of The Immaculate Conception, or The West Point Association of Graduates, Class of 1973 gift. Arrangements are by Canale Funeral Directors. The Cathedral of the Immaculate Conception will livestream the funeral mass on their Facebook page: www.facebook.com/iccathedral

Major General Paul Frederick Hamm (Retired) passed away on January 25, 2021, after a long and courageous battle with complications from Parkinson&#8217;s Disease. He fought the disease with dignity and without complaint. Paul, age 69, was married... View Obituary & Service Information

The family of Major Gen. Paul Frederick Hamm created this Life Tributes page to make it easy to share your memories.

Send flowers to the Hamm family.