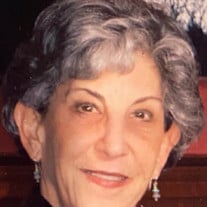 With deep sadness, the family of Peggy Weiller Seessel, born May 12, 1941, announces her death of natural causes at the age of 81 on May 14, 2022. Peggy was our sister, mother, aunt, grandmother and special friend to many. She will be missed. Peggy was born on May 12, 1941 in Baltimore, Maryland to Donald and Doris Weiller. She attended Milford Mill High School, Simmons College and graduated from Northwestern University at the age of 21. Peggy was a gifted student, fierce tennis and field hockey player and spent summers at Tripp Lake Camp in Maine. She and her older sister, Nancy, were best of friends, so inseparable that their mother dressed them alike. They were so close that they chose to share a room together all the way through high school. They attended camp together where Peggy began asserting her independence, a quality that only grew stronger over the years. While at Northwestern she studied Education of the Deaf. She married her former husband, Art Seessel, in1962 and moved to Memphis, Tennessee soon after. Having only been to the south once to meet the Seessel family, Peggy embraced her new life as a southerner, joining in the long history of Seessel family traditions, making friends and becoming involved in the community. Art and Peggy had two children, Andrew and Kay. Upon moving to Memphis, Peggy worked at Dr. John Shea’s Ear Clinic. She always loved the field of education and was drawn towards work with at risk and underserved children. She worked at the Auburndale School, Runaway House, Lakeside Hospital, and eventually combined her love of education and the arts as the Director of Arts Education at the Memphis Arts Council. She made an impact on countless youth through her work. Walking into Peggy’s house it was immediately clear what the most important things were to her: her family and her community. Every bare space is covered with photos of her children and grandchildren and memorabilia from the numerous non-profit events she participated in or helped organize. Kay, Doug, Wilson and Cameron of Seattle and Andy, Jen, Katherine and Lauren of Bozeman were the lights of her life. She was very proud of her grandchildren and loved every opportunity to spend time with them or talk to them on the phone. Peggy was also a devoted supporter of the arts community in Memphis. It was impossible to be around her and not be impressed by her true devotion to the arts and the importance of the arts in improving the lives of all Memphians, but especially those less advantaged. Peggy’s loyalty and commitment to Memphis was evident in her service to the city. Over her years she gave countless hours to many nonprofit organizations. She deeply believed in the potential of the city and never shied away from giving her time, talent and passion to make the city a better place. Some of the organizations that have benefited from Peggy’s spirit of volunteerism are Arts Memphis, MIFA, The United Way, Memphis Park Commission, Memphis Symphony LeagueThe Memphis Zoo, The Memphis Botanical Gardens, Bridges, Carpenter Art Garden, St. Mary’s Episcopal School, Memphis River Festival. Peggy leaves behind her children Andy (Jennifer) of Bozeman, MT and Kay (Doug) of Seattle, WA, her 4 cherished grandchildren, her beloved older sister Nancy and many nieces and nephews who adored her. The family extends its gratitude to the amazing nurses on the Restorative Care Floor at Baptist Hospital who took care of Peggy during her last weeks. We also want to thank Whitney Thacker who started as Peggy’s Care Manager over 2 years ago and became her friend and confidant and a member of our extended family. In lieu of flowers, donations can be made to Carpenter Art Garden or Arts Memphis. There will be a celebration of Peggy’s life this fall.

With deep sadness, the family of Peggy Weiller Seessel, born May 12, 1941, announces her death of natural causes at the age of 81 on May 14, 2022. Peggy was our sister, mother, aunt, grandmother and special friend to many. She will be missed.... View Obituary & Service Information

The family of Peggy Weiller Seessel created this Life Tributes page to make it easy to share your memories.

With deep sadness, the family of Peggy Weiller Seessel, born...

Send flowers to the Seessel family.