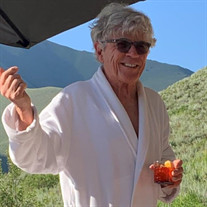 Peter R. Formanek, died Saturday, March 7, 2020, at his Memphis home at the age of 76, and unapologetically, would have been late to his own funeral. Known widely by business colleagues for his visionary and pioneering role as co-founder of AutoZone, and by his family and friends for his goofy humor, genuine charm, and enormous heart. Peter won’t just be remembered as a pioneer in the business world but also for his movie star hair and piercing blue eyes. Peter was born July 13, 1943, in Greenwich, Connecticut, to Maria Barone and Paul Peter Formanek. He came from humble beginnings, but through a good measure of native intelligence and hard work, received a scholarship to Phillips Academy in Andover, Massachusetts. He then went on to attend the University of North Carolina at Chapel Hill, graduating with a bachelor of arts in French. There he became close friends with his fraternity big brother, J.R. (Pitt) Hyde. Their friendship led to summer internships at Memphis- based food wholesaler Malone & Hyde. Following college, he and Pitt traveled to Morocco, where Peter’s impassioned negotiations with street vendors demonstrated an early knack for making deals and stretching pennies, which became a lifelong obsession in both his personal and professional life. In the early days of AutoZone, he instituted a “culture of thrift” at the company, clearly recognized by his AutoZone team as just a euphemism for “follow my lead and save at every opportunity.” After college, Peter attended Harvard Business School on scholarship and earned a master’s degree in business administration in 1968. Upon graduating, he received a Woodrow Wilson Fellowship and chose to teach in Memphis as an assistant professor in economics at LeMoyne-Owen College, an HBCU in Tennessee. On the heels of Martin Luther King Jr’s assassination, he was asked by friends if he was still planning to go to Memphis. He responded enthusiastically and without hesitation, “You betcha, now more than ever.” When his economics class at LeMoyne-Owen College failed to attract any students, Peter pulled one of his first ingenious marketing ploys by changing the name of the class to “How To Be A Tycoon; if you want to go the mile, stay in style”. Donning a double-breasted jacket he had recently purchased from a thrift store, Peter arrived to a packed house on his first day of class. His time at the school demonstrated what would become a theme throughout his entire life: fiercely advocating for the underdog and for education. He passionately believed every person deserves to start on a level playing field. Peter would remain a trustee for Lemoyne- Owen College for 32 years. While teaching, he worked at Malone & Hyde, and at the age of 27, he became President of one of the company’s retail divisions, Super D Drugstores. The next chapter began with Peter and Pitt scouring the country for their next venture. In 1979, they opened their first auto parts store, Auto Shack, in Forrest City, Arkansas. Renamed AutoZone in 1987, the company experienced unprecedented growth with Peter serving as President and Pitt as Chairman. “Peter always knew the value of putting the customer first,” said Bill Rhodes, the current CEO of AutoZone. “He showed us all that we could be tough without sacrificing kindness and that we all could be leaders without sacrificing grace and humility.” Arturo Miranda, a beloved employee said, “He was a man of his word and always made everyone feel like family.” Peter was always quick to credit others for AutoZone’s success. “Peter was fiercely loyal to his team,” said dear friend Jeff Meskin. “He viewed his management team as family, and they accomplished things no one ever believed they could. What was special about Peter was that every time I had a conversation with him I learned something important, whether about business, family, investing or life in general -- often about managing the difficult situations as well as successes along the journey.” Upon his retirement from AutoZone in 1994, Peter remained an active participant and leader in the business world, serving as a director for several large public companies, including Burger King Corp., Borders Group Inc., Sports Authority Inc., and Perrigo Co. But most importantly, he turned his attention to the joy of raising his two children, Robin and Peter, alongside their loving mother, Robin Kerns Formanek. This included ski trips to Deer Valley and summer adventures across Europe and on their beloved Tenderfoot Ranch in Montana. Peter also continued to pursue his other passions, nature and philanthropy. Through his philanthropic pursuits, he focused on education, the arts, criminal justice reform, low-income healthcare, and extreme poverty relief. Most notable among these were Core Knowledge Foundation, Church Health Center of Memphis, Shelby Farms Park, The Memphis College of Art, The Brooks Museum, and the African charities Muso (Mali) and Give Directly (Kenya/ Uganda). He lived by the motto “take care of the downside, and the upside takes care of itself”. He came to this in no small part from role model and counsel, Malone and Hyde former CFO Walter Rotchild. Peter was a devoted and loving father to his daughter, Robin Lauren (John Cianciolo) of Los Angeles, and his beloved late son, Peter Hale, for whom he memorialized the Wolf River Bridge at Shelby Farms Park in his honor. He also adored his grandchildren, Sofia Formanek and Peter Sebastian Cianciolo (Bashie). Peter married Mary Lee Copp in 2008. Through this union, Peter embraced an expanded family, with stepdaughter, Liza Canale (Baker Eadie) of Nashville, and children, Liam and Benjamin Eadie; stepson, Christopher Canale (Rachel Baar) of Salt Lake City, and children, Sophie and Milo Canale. He is also survived by his brother, Jonathan Formanek, former Director of Design and Construction for AutoZone, of Dallas. His family will hold a private memorial service at a later date. In lieu of flowers, the family requests memorials be sent to the Church Health Center at 1350 Concourse Avenue, #142, Memphis, TN, 38104 or the Peter Formanek Fund at the Community Foundation of Greater Memphis, 1900 Union Avenue, Memphis, TN 38104, or at https://www.cfgm.org/Formanek.

Peter R. Formanek, died Saturday, March 7, 2020, at his Memphis home at the age of 76, and unapologetically, would have been late to his own funeral. Known widely by business colleagues for his visionary and pioneering role as co-founder of... View Obituary & Service Information

The family of Peter R. Formanek created this Life Tributes page to make it easy to share your memories.

Send flowers to the Formanek family.