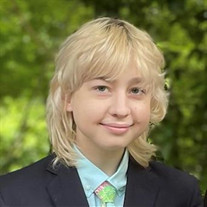 Phillips Hastings Pratt peacefully died April 21, 2022, at St. Jude Children’s Research Hospital. He was an 18-year-old senior at White Station High School. Phillips was diagnosed at the age of fourteen with fibrolamellar hepatocellular carcinoma and received treatment at St. Jude Children’s Research Hospital, Boston Children’s Hospital, and Dana-Farber Cancer Institute, with Rush University Children’s Hospital consulting closely. Phillips was given love, dignity, and exceptional care by everyone who knew him at all of these distinguished institutions. He was a determined and fierce fighter and never wanted his diagnosis to define him. After receiving a living-donor liver transplant from his cousin Ellen Virginia Cassin, Phillips stoically endured multiple surgeries and treatments. He always knew what was expected of him in order to be released from the hospital after every surgery and was faithfully compliant with his transplant protocol. During all of this he even managed to stay on the principal’s honor role at White Station while taking honors classes and especially enjoying Latin Club. Phillips lived life to the fullest and loved traveling and took his Make-A-Wish trip to Tokyo, where he relished learning all about the culture. During his short life and illness, Phillips traveled to Santa Monica, CA, took frequent beach trips with his McAfee cousins, swam on the youth swim team at Rhodes College, got his driver’s license and his dream car, a bright blue Mini Cooper on his 16th birthday, started a successful slime company, Sus Slime Co. with his friend Cara Berretta, and worked a summer job at Jerry’s Sno Cones. He and his friends loved to picnic in the park and especially enjoyed watching sunsets together. They affectionally referred to their time together as “Phi’s Park.” While some might fold, given the gravity of their situation, Phillips was busy living his best life on his own terms and was an inspiration to behold. Phillips is survived by his parents, Leigh Sorsby Pratt and Charles Benton Pratt IV and brother, Charles Benton Pratt V. Additionally, he is survived by his grandparents, David Phillips Sorsby, Jane Morgan Sorsby and Sarah Dillon Pratt; other survivors include his numerous aunts and uncles, and his many steadfast cousins. He was preceded in death by his grandmother Joanne McAfee Sorsby and grandfather Dr. Charles Benton Pratt III. Phillips’ grandfather, Dr. Pratt, spent 37 years as a physician at St. Jude, specializing in rare solid tumors just like Phillips’ caseand would have been so proud of how smart and courageous Phillips was even at the end. In Phillips’ last days he was surrounded by the love of his devoted friends, family, and faithful cat Kiki. Special thanks to his many caring doctors, nurses, and staff, including Dr. Wayne Furman, Dr. Jessica Gartrell, Dr. Michael Terao, his quality-of-life team and especially his nurse Dawn Carter, Dr. Allison O’Neill, and Dr. Paul Kent. There will be a visitation at St. Peter’s Catholic Church Parish Hall on Thursday, April 28 at 12:30, followed by a service at 1:30. Burial will be immediately after at Elmwood Cemetery. Those wishing to honor his memory may donate blood in Phillips Pratt’s name at the St. Jude Blood Donor Center that can be reached at 901.595.2024 or [email protected] Also, a memorial fund in Phillips’ honor has been established at Paragon Bank. Donations can be directed in person or by mail to The Phillips Pratt Memorial Fund at Paragon Bank, 5400 Poplar Avenue, Memphis, TN 38119. Phillips’ family requests that in lieu of flowers, donations be made to this fund that will go directly toward funding research to find a cure for fibrolamellar carcinoma. Finding a cure for this horrible disease was important to Phillips and held an important place in his heart.

The family of Phillips Hastings Pratt created this Life Tributes page to make it easy to share your memories.

Send flowers to the Pratt family.