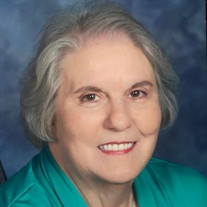 Rhonda Grimes Bryant passed peacefully in her sleep while at home on August 1, 2020. Born on August 7, 1949, to Wayland and Dorothy Grimes of Palestine, Arkansas, she was the oldest of “theirs” with seven brothers and sisters, Wayvonne, Wilma Jean, Billie, Kayo, Larry, Nick, and Keith. She attended Memphis State University, now known as the University of Memphis, where she met her husband of 51 years, John Mathis Bryant Jr. Once married, she joined John’s family as a beloved 4th sister to Jimmy, Margaret, Faye, and Betty. Rhonda started work in the industrial pipe business as a secretary and worked her way up to owning her own company, Interstate Pipe Supply. She was a female entrepreneur in a male-dominated industry. After retiring from her career in the pipe business, she transitioned to John Bryant Estate Sales and was beloved by many in the industry who knew her. She was a resident of the Central Gardens community for 42 years. Rhonda was a loving mother to John Mathis Bryant III, whom everyone knows as Tiger. Even though she only had one child, she cooked for an army. Her son recalls, “My house was a hub. Friends would come into town knowing they had a second mother ready to greet them.” A famously good cook, she never arrived anywhere empty handed. She loved a good recipe, and some of her greatest hits include her Toll House pie, cornbread stuffing, and sprinkle cake. The best part was that she would share the recipe with anyone who asked. Although, no one’s recreation was as ever good as her original. She cherished her role as grandmother to her three grandkids, Mary Harbert Stromberg, John Mathis Bryant IV, and Barnes Elise Bryant. Her grandchildren would describe her as selfless, brave, and the kind of grandmother that never had trouble showing how much she loved you. She wanted everyone to know she always tried to be an honest and fair person. But truly, Rhonda was just the kind of person you wanted to be standing next to in a room. She could talk to anyone, making them feel as though they had been friends all along. She’d invite anyone to join their family for a meal, and in her quiet way she made everyone feel welcome. She cared nothing about possessions. She cared about her family, people, and friends. She said she tried to tell someone everyday she loved them because she knew it made them happy, and it made her happy. You could meet her once and she would hug you like she’d known you her whole life. She was involved with the Women’s Guild at St. Peter’s Church, Quota club, and was a frequent donor to Memphis Humane Society. Rhonda approached death with the same humor she found in life. Before she passed, she was very specific. She wanted to donate “usable, working parts only” and expressed that she wanted to be visited everyday at 7 am – well, we’ll try! She also wanted a bottle of wine “on Rhonda” after her funeral liturgy service, which will be held at St. Peter’s Catholic Church on Wednesday, August 12, 2020 at 2 pm. In lieu of flowers, Rhonda requests donations to the American Heart Association, American Cancer Society, ALS Association Tennessee Chapter, and the Memphis Humane Society. In light of COVID-19 precautions, masks and social distancing will be required.

Rhonda Grimes Bryant passed peacefully in her sleep while at home on August 1, 2020. Born on August 7, 1949, to Wayland and Dorothy Grimes of Palestine, Arkansas, she was the oldest of &#8220;theirs&#8221; with seven brothers and sisters, Wayvonne,... View Obituary & Service Information

The family of Rhonda Grimes Bryant created this Life Tributes page to make it easy to share your memories.

Rhonda Grimes Bryant passed peacefully in her sleep while at...

Send flowers to the Bryant family.