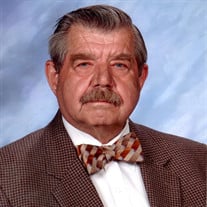 Robert (Bob) Paul Wiese, 85, was born April 29, 1936 in Lafayette, Indiana to Paul Robert and Florence Elizabeth (Cowger) Wiese. Bob has three brothers, John (Anne), Thomas (Judith) and Louis (Goldie). He was preceded in death by his parents and his oldest son, Monty Lynn Wiese. Bob was baptized June 14, 1936 at Emanuel Lutheran Church of New Haven, Indiana where he also attended school and was confirmed on April 2, 1950. He graduated from New Haven High School on May 28, 1954. He played the flute and piccolo in the high school marching band and had a great love for all musical instruments and band music. He went on to attend Purdue University where he obtained his Bachelor's of Science Degree in Civil Engineering on August 5, 1960. While there, he participated in the University-Industry Cooperative Education Program with the Frisco Railroad and his co-op partner, and long term friend, Tom Adams. Bob was drafted into the Army and worked for the Corps of Engineers at Ft. Belvoir, VA on a folding bridge where he was assigned to a special tank project. In 1961, the Army sent him to shovel snow for President John Kennedy's inauguration. He was honorably discharged September 30, 1966. On November 26, 1969, he married Janet Louise at Grace Lutheran Church of Tulsa, Ok. Together they have five children, Monty Wiese, Shondel McPherson (Michael) of Denison, TX, Tangina Sanders (Larry) of Memphis, TN, Amy Hoge (Thomas) of Ocean Springs, MS and John Robert Wiese (Allene) of Memphis, TN. They also have been blessed with 11 grandchildren and 7 great grandchildren. Bob was very proud of his family and his number one activity was spending time with them. Following his retirement from the railroad, he worked at Federal Express before becoming employed at his beloved church, Christ The King Lutheran Church and School of Memphis. The children of the school loved to wave and shout "Hi, Mr. Bob" whenever they saw him around campus. He served his church family faithfully until his health no longer allowed him to continue. Bob also leaves behind his very best feline friend, Yaya. The family requests any memorials be sent to Christ the King Lutheran Church.

The family of Robert "Bob" Paul Wiese created this Life Tributes page to make it easy to share your memories.

Send flowers to the Wiese family.