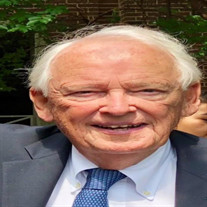 Robert Jones Hussey Jr. “Bobby” passed away peacefully at his home in Memphis, Tn on May 20, 2021. Born on October 27, 1932 in Memphis, TN the eldest child of Robert J. Hussey and Kathleen C. Hussey. Bobby attended The Baylor School in Chattanooga, Tn and earned his business degree from the University of Mississippi. While attending Ole Miss he was a member of Phi Delta Theta Fraternity. He then served as an Officer in the United States Navy. He entered the cotton business following his father and grandfather into the cotton business. In 1960 Bobby married Eva Mae Duncan and they spent the early years of their marriage in Greenville SC. The first seven years of his cotton career were with McFadden Cotton Company. In 1963 he joined his childhood friend and fellow Camp Carolina alumni William B. Dunavant’s cotton business on Front Street. Bobby spent the next thirty years working with an incredibly talented group of people. In 1993 Bobby retired from Dunavant Enterprises and embarked upon a new chapter of life focused on helping his community, hunting, fishing, and travel. Bobby was an enthusiastic supporter of the Arts especially the Dixon Gallery and Gardens. In his later years, his interest grew in the fight to eliminate hunger and poverty in the Mid-South especially as it related to children. He was emphatic that these efforts continue after his death. After all his travels there were two places that fed his soul. The beach in Destin, Florida and Menasha Hunting and Fishing Club. Bobby and Eva honeymooned in Destin and continued to visit over the next sixty years. Silver Dunes was his home away from Memphis. He often said that of all the beaches he had seen around the World that Destin was his favorite. Bobby was a passionate outdoorsman. His greatest fly fishing adventures were with his friend Griff Burr. They traveled to the Florida Keys, Bahamas, and Mexico spending countless hours and days in pursuit of the elusive Permit. He enjoyed wonderful comradery with the members of Menasha especially with Bobby Leatherman who was his opening day hunting partner for several decades. There were many great friends and stories from his 56 years of membership in the University Club. Bobby was also a long-time member of the Memphis Country Club and Menasha Hunting and Fishing Club. He served on the Board of Trustees of Presbyterian Day School, Memphis University School, and The Dixon Gallery and Gardens. Eva and Bobby have been long standing members of Independent Presbyterian Church. Bobby is survived by his wife of 61 years Eva and his son Robert Jones Hussey III (Julie) of Memphis TN and will be missed by his grandchildren Robert Jones Hussey IV and Edwin Tanner Hussey. He is also survived by his brother Edwin C. Hussey (Julia). He was predeceased by his parents and brother Richard W. Hussey. The family would like to thank Della Harville, Linda Smith, and Curtis McCalleum for providing outstanding care. There will be a visitation at 10am followed by a memorial service at 11am held at Independent Presbyterian Church on May 22, 2021. Memorials may be sent to The Dixon Gallery and Gardens or Palmer Children’s Home

The family of Robert "Bobby" Jones Hussey Jr. created this Life Tributes page to make it easy to share your memories.

Robert Jones Hussey Jr. “Bobby” passed away peacefully at his...

Send flowers to the Hussey family.