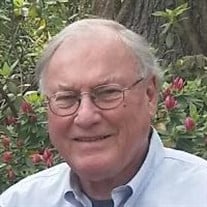 Clint Crabtree, 80, passed away on November 11th, 2019, after a brief but courageous battle with cancer. He is survived by his wife of 54 years, Sue Hyde Crabtree; a daughter, Paige Crabtree Henson and a son, Jess Chambless Crabtree (Amy); five grandchildren, Fletcher Henson, Wendell Henson, Amelia Crabtree, Hyde Crabtree and Wills Crabtree; a sister, Dee Ann Holcomb of Beeville, TX and a brother, Jeff Crabtree (Pam) of Millington, TN; and a sister-in-law, Harriet Hyde Towle (Wally) of Hot Springs, AR. Clint grew up in Lucy, TN and graduated from Millington High School in 1957. After graduation he moved to Washington, DC to work for the Federal Bureau of Investigation. He later returned to Memphis and attended four years at Memphis State University. From 1963 to 1969, he served in the Tennessee Air National Guard, attaining the rank of Staff Sergeant. Clint began working in the Shelby County Circuit Court Clerk’s office in 1964 and was elected to his first term as the Circuit Court Clerk in 1978. He went on to be re-elected to three more terms as the Clerk and retired from the Shelby County Circuit Court in 1994. During his time as the Circuit Court Clerk, he served as the president of the board of directors of the Shelby County Employees Credit Union, treasurer of Concerned Employees of Shelby County and a board member of Memphis Boys Town Inc. After retirement, he continued to work from his home office building an independent title abstracting practice, providing real estate title work for many West Tennessee attorneys and title companies. Clint enjoyed this work up until his illness in September 2019. “Pop”, as he is known to his five grandchildren, was an avid outdoorsman and enjoyed spending time with his family at the beach, at Lake Hamilton and at the family farm. He loved fishing, hunting and camping all his life and especially enjoyed sharing those experiences with his grandchildren at every opportunity. Another of his favorite pastimes was watching the thoroughbred horses race at Oaklawn Park in Hot Springs, AR and Churchill Downs in Kentucky. Throughout the years, he looked forward to annual hunting trips with lifelong friends to Texas and Iowa, and fishing trips to Canada and the Gulf Coast. For over 40 years, he shared these outdoor stories with friends in the Toothpick Club, a wild game dinner club of which he was an officer for many years. Clint was a loving husband, father, grandfather and friend. A memorial service will be held on Saturday, November 16, 2019, at 2:00 pm at Idlewild Presbyterian Church, 1750 Union Avenue, Memphis, 38104, with a reception following at the church. In lieu of flowers, memorials may be made to St. Jude Children’s Research Hospital or Idlewild Presbyterian Church.

Clint Crabtree, 80, passed away on November 11th, 2019, after a brief but courageous battle with cancer. He is survived by his wife of 54 years, Sue Hyde Crabtree; a daughter, Paige Crabtree Henson and a son, Jess Chambless Crabtree (Amy); five... View Obituary & Service Information

The family of Robert Clinton Crabtree Jr. created this Life Tributes page to make it easy to share your memories.

Send flowers to the Crabtree family.