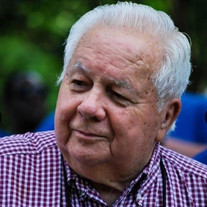 Robert Edward Flowers passed away unexpectedly on November 21, 2020, only hours after his 89th birthday. Bob was born in Memphis on November 20, 1931, the son of Dallas Edward and Evelyn Parker Flowers. He had a twin brother, William Dallas (Bill), whom he regarded as his first and lifelong “best buddy.” Bob was especially close to his mother, who raised the two boys while their father worked long and dangerous hours as a salvage foreman on the Mississippi River. Bobby, as he was known, could often be found playing sports at Gaston Park with his brother Bill; from eleven to seventeen, they rose at 3 am to throw papers for the Memphis Commercial Appeal. And at South Side High School, where he played varsity football and baseball, he and Bill were together voted “Best Dressed,” a testament to their mother’s frugality and professional seamstress skills. Bob married Iva Lou Hill in 1960, after attending Memphis State. He was a steel executive, small business owner, and skillful salesman. He and Iva Lou were members of First Baptist Church, where for years he chaired the finance committee and taught the Young Married and other Sunday School classes. Bob spent hours preparing for his weekly Sunday School lessons. Members of his class often complimented him as one of their most inspiring teachers, and his was chosen for First Baptist’s Radio Bible Class. Bob supported the church actively in countless ways, including mission trips to Romania and, with his oldest daughter, to South America. As for the wider community, Bob was a member of the board of trustees for Baptist Hospital, chairing it during the hospital’s years of expansion. He served as president of the board of directors and interim principal for Whitehaven Presbyterian School as well as helped found the Memphis Preparatory School, where he was also a board member. Bob absolutely adored being the husband of Iva Lou and the father of three girls, Lou, Betsy, and Anne. With Iva Lou, he was a fun-loving parent. He welcomed his daughters’ friends into their home, coached their basketball team, chaperoned their church retreats, and always believed in and supported their passions. He was fiercely proud of their every accomplishment, large and small, and cried throughout any ceremony or graduation that involved one of his daughters. When it came time to go off to college, move across the country to graduate school, or even head down the street to a new house, their father could always be counted on to drive the U-Haul and haul boxes. A sign of his expansive heart, Bob regarded his three sons-in-law as Flowers, treating them as his own sons. And as GrandBob, he relished moments with each of his seven grandchildren. In fact, Grandparents Day was one of his year’s highlights. In turn, a highlight for any family member was a sports outing with GrandBob. An avid sports fan, GrandBob held season tickets to Ole Miss football in the fall, Memphis State basketball in the winter, and eventually the Memphis Redbirds in the spring and summer. He also loved restaurants, and was a regular at every hole-in-the-wall BBQ place in Memphis; going to the movies, where he was an undiscerning critic, declaring each film a contender for the Academy’s best picture of the year; giving, often at his own expense; cooking, his specialties were cornbread and spaghetti; and taking trips with Iva Lou to the mountains of North Carolina. For 29 years, he looked forward to and delivered the prayer at the Fourth of July Pidgeon Estates Community Parade. GrandBob was a larger than life personality, known for his ready repartee and sometimes corny jokes. Almost always, though, he used his humor to sooth situations and ease tensions, a lesson he passed on to his daughters. He had the rare ability to laugh at himself and to make others feel special in his presence. The room was always lighter and brighter with Bob. It is poetic that GrandBob died during Thanksgiving week. Thanksgiving was his holiday, as it involved fellowship, food, family, fun, and most of all, gratitude, which he possessed in abundance. Every year, he made his mother’s turkey and dressing, which became a sought-after commodity among friends, family, and neighbors. Ready with a willing spirit and hospitable heart, he carefully cooked days in advance, often with a grandchild at hand, marking the holiday with many joyful moments across the years. GrandBob’s favorite saying was “this, too, shall pass,” and he often reminded his daughters, sons-in-laws, and grandchildren of this truth at their more difficult moments. The most painful period in Bob’s life was the illness of Iva Lou, and he devoted his last six years totally to her care. His daughters will always remember the ways he tirelessly attempted to meet their mother’s every need, despite his own failing health, and how, along the way, he found internal strength and resources. He was heartbroken over her death six weeks prior to his. While GrandBob’s physical absence is nearly incomprehensible to his children and grandchildren, they are consoled that for him, “this too has passed,” and that he is reunited with Iva Lou in the boundless mercy and inexhaustible goodness of God. Bob is preceded in death by his wife of 60 years, Iva Lou. He is survived by three daughters and sons-in-law, Lou and Jerry Martin, Elizabeth (Betsy) and Darren Middleton, and Anne and Cory Tinker; seven grandchildren, Elizabeth (Charlie) Pittard, Jerry B. (Madison), and Louis Martin; Jonathan Middleton; and Andrew (Ashley), Reid, and Ivy Grace Tinker; one great grandson, Elliot Tinker; his brother, William Dallas (Norma), nephew, Dallas Flowers, and niece, Sherry Pioreck, and their families. A private burial service for immediate family will be held on Thanksgiving Day. In lieu of flowers, the family requests that any memorials be sent to First Baptist Church or the Ave Maria Home Foundation.

Robert Edward Flowers passed away unexpectedly on November 21, 2020, only hours after his 89th birthday. Bob was born in Memphis on November 20, 1931, the son of Dallas Edward and Evelyn Parker Flowers. He had a twin brother, William Dallas... View Obituary & Service Information

The family of Robert Edward Flowers created this Life Tributes page to make it easy to share your memories.

Send flowers to the Flowers family.