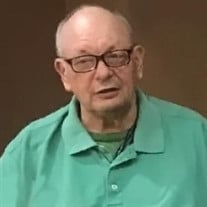 Bobby Lawson (Robert King), known to his family as Uncle Bobby, died peacefully May 30, 2021. A devoted son, caretaker, friend and family member, he was 74. He died from complications associated with diabetes. A graduate of East High School, he attended the University of Memphis, Bobby spent much of his career as operations manager for the M. Palazola Produce Co. in Memphis. He was an avid sports fan and closely followed the University of Memphis basketball team. Ever the optimist, if the Tigers weren’t on a winning streak, he’d say, “It’s a building year. We've got some great recruits coming in. We’ll be really amazing next year.” He was a “Jeopardy” addict who accepted no calls during the program. He also loved old movies and over the years he became a lively raconteur, a generous, talented cook, an art enthusiast, and a country-music and soul-music fan. Bobby never missed a chance to celebrate an occasion with his friends and family. One of his avocations was cooking barbeque for family celebrations. He once trucked a cooking unit and coolers filled with pounds of pork to Santa Fe, New Mexico, to celebrate the college graduation of his niece, Leslie. He also hosted a celebratory barbeque for his sister, Vicki and nephew, Drew, when they graduated from UNH. (Vicki with her Master’s/Drew with his B.A.) and again when Drew received his Master’s degree in New York City. He packed 50 pounds of frozen pulled pork and set the bags all around his hotel room to thaw. The event was held in Riverside Park and Bobby invited passing joggers and bicyclists to join the party. When he married, he chartered a paddle boat-wheeler, hired two bands (one for each floor) and reveled at the twilight reception on the Mississippi. A post-reception party was held at the Heartbreak Hotel restaurant, now closed. Bobby was an avid decorator for Halloween, handing out enough candy to boost Hersey’s stock a point or two. And at Christmas, he had lights and singing snowmen, delivered poinsettias and Texas red grapefruit to friends, neighbors, and co-workers. Easter, he and a close circle of friends, held an annual egg decorating competition. He’d bring bags of Dollar Store feathers and eyes. Stickers. Also he was a baseball cap collector. The count is well over 200. For 20 years Bobby and his mom shared a residence in East Memphis, Following her stroke at age 85, he was her primary caregiver, making her breakfast, sorting her pills, and bringing in the newspaper before leaving for work. Each night he made her dinner and gave her a glass of wine. He could make her laugh when there was little to laugh about. Bobby was born and lived most of his life in Memphis. He leaves scores of friends and work colleagues in the Memphis area. “Bobby was the greatest friend and supporter,” said a long-time pal. “He never took advantage of anyone. He just tried to help.” He was the son of Weston G. Lawson and Virginia King Lawson, both deceased. Bobby is survived by the following siblings: sister Victoria Lee Lawson Hendrickson and her husband, Dyke C. Hendrickson, of Newburyport, MA.; Weston G. “Wes” Lawson of Olive Branch, MS., and his wife, Rose Marie Lawson, of Olive Branch, MS; and Melissa Lawson Galloway of Memphis. Nieces and nephews include Victoria Leslie Hendrickson Janca and husband Andi, of New York City; Drew Carter Hendrickson and wife Natalia Martinez, great nephew, Nico Hendrickson-Martinez, of Somerville, MA; Weston G. “Trey” Lawson III and his wife Rachel of Olive Branch, MS.; Phillip Lawson and his wife Laura of Olive Branch, MS and Chandler Pearce, of Memphis. Also Beth Peters and family. Funeral arrangements have not been finalized. A memorial service will be held in October. The family asks for no flowers. Donations in Bobby’s name can be made to St. Jude’s Children’s Research Hospital in Memphis and War Horses for Heroes program in Olive Branch, MS. Anyone who would like to share a story about Bobby is invited to post it here.

Bobby Lawson (Robert King), known to his family as Uncle Bobby, died peacefully May 30, 2021. A devoted son, caretaker, friend and family member, he was 74. He died from complications associated with diabetes. A graduate of East High School,... View Obituary & Service Information

The family of Robert King Lawson created this Life Tributes page to make it easy to share your memories.

Send flowers to the Lawson family.