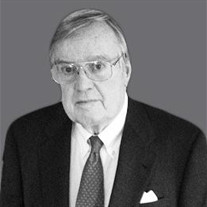 Robert Smithwick, Jr., 86, died at home on December 12, 2019. He was born in Memphis, TN on August 22, 1933 to the late Robert and Juliet Smithwick. He was predeceased by his wife Catherine Smithwick, who was his best friend and the sparkle in his eye. Bobby graduated from the Baylor School and the University of Virginia. At Virginia he was a member of Eli Banana. He enjoyed a long career as an executive of E.H. Crump & Co., and served as a director of the company. He was past president of the Insurers of Tennessee, and was king of Carnival Memphis. He was a member of the Memphis Hunt and Polo Club, Memphis Country Club, and the Mountain Brook Club in Birmingham. He served on the vestry of Calvary Episcopal Church, and was most recently a member of Second Presbyterian Church. Bobby is survived by his sons Robin Smithwick (Ann), Edward Smithwick (Michele), Louis Smithwick and Christopher Smithwick, as well as Catherine’s children Glenn Perry (Marcia) and Comer Neal (Britton). After raising his four boys with their mother Louise Crump Wade, he was graced with five granddaughters whom he adored: Brannon, Blair, Maysie, Moran and Saunders. He will be remembered for his kind heart and quick wit. He was always a gentleman and a scholar of trivial facts (American presidents, state capitals, car models, and many others). He loved his Sunday tennis games, and despite a questionable singing voice, he had a passion for music. He was a man with several nicknames. Most people called him Bobby, but for reasons not fully divulged, his close friends called him Smoothie. His grandchildren called him Pop because of his love for popsicles and all things sweet. But most appropriately, Catherine called him Bobby Dear. He truly was. After a private family service, a Celebration of Life will be held at the Memphis Hunt and Polo Club on December 27 from 4:00 to 6:00 pm. In lieu of flowers, memorial donations may be made to the Memphis Botanic Garden, the Mid-South Parkinson’s Disease Foundation, or the organization of the donor’s choice.

Robert Smithwick, Jr., 86, died at home on December 12, 2019. He was born in Memphis, TN on August 22, 1933 to the late Robert and Juliet Smithwick. He was predeceased by his wife Catherine Smithwick, who was his best friend and the sparkle... View Obituary & Service Information

The family of Robert Smithwick Jr. created this Life Tributes page to make it easy to share your memories.

Send flowers to the Smithwick family.