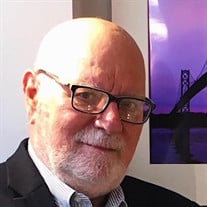 Robert T. (Terry) Thompson, beloved father, grandfather, brother, mentor and friend to many, passed away on June 20th, 2020 after a brief illness. Terry was born on August 4, 1938 in Baton Rouge, LA to George and Murlyne Thompson. He grew up in Jackson, MS as the oldest of six children and attended St. Joseph’s High School. He met the love of his life, Frances Kitchens, on a double date where she was his best friend’s date. The next night, Terry and Frances went out on a date together and were inseparable from then on. They were together for 61 years until Frances passed away in December of 2019. Terry’s career took him from working on the railroad as a telegraph operator to a long career in sales in the lumber industry. Terry was a scholar with a lifelong love of learning and research. He graduated from the University of Memphis at the age of 55, after making sure that his children finished college first. He was an accomplished photographer , a published writer, and a researcher. He enjoyed music and poetry, and especially loved the works of Shakespeare. He delighted in his participation in the Shakespeare Readers group in Memphis, and also devoted many volunteer hours to the Memphis Public Library system. Terry leaves three daughters, Erin Thompson Weglicki (John), Terri Thompson Schoonover (Bill), Lynn Thompson Rainey (Patrick), and one son, Robert T. Thompson Jr. He also leaves 6 grandchildren, Taylor Weglicki (Brittany Barbee), Morgan Thompson, Matt Weglicki, Wilson Adams (Katherine), Melanie Adams and Catt Weglicki, all of whom were very close to him, and 3 great grandchildren, Olivia Spindle, Kitch Weglicki and Ruthie Adams. He was so proud of each and every one of them. In addition, he also leaves his brothers, Curt Thompson and Sean Thompson (Janet), his sister Melanie Coleman (Richard), his sisters-in-law Sandra Thompson and Marvel Thompson, and a host of nieces and nephews who love him. We learned many lessons from our Dad (and lots of silly jokes), but the most valuable was how to be of service to those you love. He took care of our mom throughout her illness, and when she passed away, he was lost without her. Although we miss him terribly, we rejoice in imagining them reunited. A private memorial service will be held at a later date. Memorials can be made in Terry’s name to the Church Health Center in Memphis, TN. “Now cracks a noble heart. Good night sweet prince; And flights of angels sing thee to thy rest!”

Robert T. (Terry) Thompson, beloved father, grandfather, brother, mentor and friend to many, passed away on June 20th, 2020 after a brief illness. Terry was born on August 4, 1938 in Baton Rouge, LA to George and Murlyne Thompson. He grew... View Obituary & Service Information

The family of Robert (Terry) T. Thompson created this Life Tributes page to make it easy to share your memories.

Send flowers to the Thompson family.