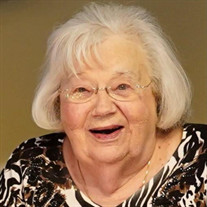 Roberta Jane Robilio passed away peacefully on Sunday, January 31, 2021. Born on March 6, 1927 in Brinkley AR. she attended Bruce Grade School and Bellevue Junior High in Memphis. She completed her education at French Camp Academy then Hinds Junior College in Mississippi. Jane was preceded in death by her father, William Bolton and her mother, Barbara Darr Bolton. She is survived by her husband of 69 years (Marshall), daughter Marsha Keller (Jim), and sons Bill Robilio (Elaine) and Chris Robilio. Jane dearly loved her seven grandchildren: Angie Keller, Brad Keller, Robert Keller, Steven Robilio (Jennifer), Michelle Hamric (Ross), Brian Robilio and Nicole Robilio and 5 great grandchildren. Jane also leaves a brother Bill Bolton, 3 nieces Judith Mulheisen (Mike), Liz Taylor (Tom), Carolyn Bolton Phoehn(Harry) and lifetime friend Susan DonLevy. Jane will be greatly missed by many nephews, family, and friends. Jane and Marshall were founding members of St. Louis Church, attending mass in the parish before the church was built. Until her children were grown, Jane was a stay-at home mom involved with her children’s activities, cooking and gardening. She was part of Robilio’ Grocery & Cafeteria at the corner of Vance Ave and East St. When the business closed, she shared her talents with Baptist Memorial Hospital in the Food and Nutrition Purchasing Department. Upon retiring from the hospital, Jane began volunteering at Baptist East. She continued lunching with the wonderful volunteers until recently. Jane was an avid quilter and loved designing and creating the “perfect” quilt for everyone that she met. The family would like to thank her caregivers Dedra Burt, Rita Rogers and Celest LeNeair for their loving and dedicated care during this time. In lieu of flowers the family request that donations be made to St. Louis Catholic Church, 203 S White Station Rd., Memphis, TN 38117 The family will gather at 9:15 on Friday, February 5th at St Louis Catholic Church, with the funeral Mass beginning at 10:00am. Interment will be at Calvary Cemetery, Memphis, TN. The family will host a reception at a later date.

The family of Roberta Jane Robilio created this Life Tributes page to make it easy to share your memories.

Send flowers to the Robilio family.