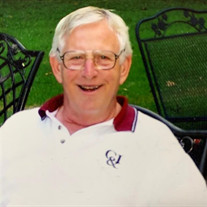 Ronald Philip Underberg 1935-2020 Lifelong Memphian, Ronald Philip Underberg, passed away December 28th at the age of 85. He graduated Central High School in 1953, then attended Memphis State University for two short years before enlisting in the Armed Forces and serving overseas. He returned to Memphis and began his next phase, selling paint, before stumbling on an opportunity to buy a small bankrupt furniture store on the courthouse steps. His next 30 years were spent growing that small business into one of Fortune 500's largest 100 Furniture Retailers. His next career change steered him into real estate. He was passionate about his work, well respected for his business acumen and for treating everyone fairly. He worked daily until his death. Ronnie was passionate about his family, friends, and employees. His generosity was felt by many through his "behind the scene" approach, while never expecting recognition or favors retuned. Ronnie's greatest pleasures included numerous trips to places around the world, rooting for Memphis Tiger Basketball, and fine dining including a nice bottle of wine. Family came first for Ronnie. He was devoted to his parents, wife, children, and grandchildren. He was preceded in death by his wife of 53 years, Polly, and is survived by his children, Mike (Marsha) Underberg, Barbie (Kevin) Schaffer, and Susan (Ben) Persin, 7 grandchildren, 3 great grandchildren, a sister Carol (Bob) Tessler, a brother Barry Jay Underberg (deceased), and his companion, Ann Churchwell. He will be sorely missed by all. A private graveside service took place on December 30th at Temple Israel Cemetery. The family requests donations be sent to Temple Israel, Theater Memphis, or a charity of the donor’s choice.

The family of Ronald Philip Underberg created this Life Tributes page to make it easy to share your memories.

Send flowers to the Underberg family.