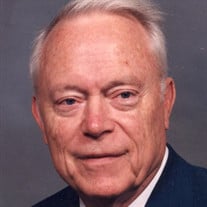 Rudolph Carl (“Rudy) Schulz, beloved husband, father, grandfather, brother, uncle, and friend, died on July 15, 2020, at the Village of Germantown, in the presence of his devoted wife Peg (his “Pootie”). Rudy was born in Jackson, Tennessee on January 15, 1926, son of Julius Rudolph Schulz and Helen Skipwith Halsell, and younger brother of Helen Schulz Scharmer. Rudy grew up during the Depression. He sold Pepsi on the street corner for a nickel and even in his 90’s always remembered the Pepsi jingle. Rudy went to the University of Alabama on an ROTC scholarship and pledged Alpha Tau Omega fraternity. He transferred to Georgia Tech to complete his studies in engineering. After Rudy graduated, he was commissioned in the U.S. Navy in 1946. Following his service, he went to work as a mechanical engineer for Proctor and Gamble in Cincinnati. He was with P&G his entire career. While in Cincinnati he met a charming young school teacher, Margaret Ann McFarlan, who was the love of his life. They married and had three children. After several corporate relocations, they settled in Memphis and made it their lifelong home. They joined Holy Communion Church in 1960 where Rudy was an active member and served as an usher. Rudy spent much of his free time tending to his backyard vegetable garden, fixing things around the house, and enjoying happy hour with his “Pootie” on their patio. He enjoyed boating and waterskiing first at Sardis Lake, then later at Pickwick Lake. Rudy spent his last years at the Village at Germantown, singing the Georgia Tech fight song, serenading his wife with her favorite tune, “Peg of My Heart”, and keeping everyone laughing with his unique sense of humor. Rudy is survived by his wife Peg, his children, Randy, Nancy and Tim, their spouses, Alex Ennever and John Oglesby, and his grandchildren, David and Will Oglesby, and Nick, Derek, Robert, and Lizzy Schulz, and their spouses, Lauren Rustowicz and Masako Otsuki. A memorial service will be held at a later date. In lieu of flowers, the family requests that a donation be made to the Church of the Holy Communion or to a charity of the donor’s choice.

The family of Rudolph "Rudy" Carl Schulz created this Life Tributes page to make it easy to share your memories.

Send flowers to the Schulz family.