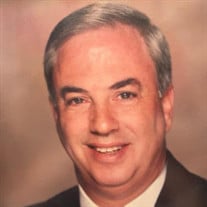 Russell Edgar Haas, of Germantown, Tennessee, passed away September 23, 2021. A devoted husband and father, he leaves his wife Sheri Babcock Haas, son Sami N. Haas (Shelby McMillian) and beloved friends both in Memphis and in Florida. He also leaves his uncle, Curt Ward and very dear nieces and nephew. He was predeceased by his mother Helen Weill Haas, sister Nancy Briggs, and step-father Marcus Loeb Haas and father, Edgar Cyrus Haas, Jr. Russell lived life well in spite of illness and used his love and desire of hunting, golfing and being with family and friends to battle through his significant medical challenges. He remained enthusiastic and retained his sense of humor and love of living throughout. He had a passion for watches, guns and loved to shop .. for anything, roadside flea markets, antiques, luxury items, it didn’t matter as long as he was in the mix and on the hunt. He viewed flea market treasures with the same enthusiasm and scrutiny as fine cherished antiquities. He was also a lover of cars and connoisseur of southern fried chicken. But mainly, his joy and comfort was always his family. Russell was a lifelong member of Temple Israel, Ridgeway County Club and a native Memphian. He served on various boards throughout his life and was involved in United Way, American Heart Association, and volunteered annually to coordinate traffic flow for the annual Youth Villages 5K . He was a graduate of White Station High School, attended University of Tennessee Knoxville where he was a walk-on Baseball Tennessee Vol. He graduated with a Bachelors of Business Administration from University of Memphis. He was also a graduate of Stanford University’s Executive Business Program. His many passions included his career at Sealy Mattress Manufacturing Company of Memphis, a company started by his late grandfather Edgar C. Haas, Sr. as Slumber Products which served the Memphis and mid-south area since the 1930’s and for over 55 years. Russell worked his way up the ranks and retired at its helm. He took great pride in this Memphis institution and the role he played in it’s success. Through this Sealy family, he would be the beneficiary of many lifelong friendships that have weathered the test of time and distance. He was a Germantown Reserve police officer for over five years and many will remember Russell as a realtor with Prudential Collins Maury now Coldwell Banker Collins-Maury Realtors. He was a longtime member of MAAR and a member of the MultiMillion Dollar Club. Real estate sales served as a successful and rewarding second career, again creating and sustaining many important friendships along the way. There will be a private graveside service at Temple Israel Cemetery. Following the service, there will be a reception for friends and family to honor & celebrate him at the family home at 9798 Lipsey Cove, Germantown, Tennessee on Monday, October 4, 2021 from 4:30-6:30 p.m. The family requests that in lieu of flowers, a donation may be made to American Diabetes Association, MIFA or a charity of the donor’s choice. Messages of condolence may be sent to the Haas Family at [email protected]

The family of Russell Edgar Haas created this Life Tributes page to make it easy to share your memories.

Send flowers to the Haas family.