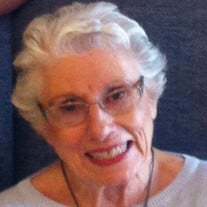 Sara “Stig” Lear Baird, wife, mother, grandmother, sister, aunt and friend died peacefully October 31, 2019 at the Village of Germantown where she was a resident. She was born March 14, 1924 in Greenwood, MS the daughter of the late Sarah Martin Smith and James Hamilton Lear. Sara graduated from Greenwood High School and received her BA degree from the University of Mississippi where she was a member of Chi Omega Sorority. Sara married the late Robert Atkinson Baird III of Clarksdale MS in1947. After living in Phoenix and the Chicago area they moved to Memphis in 1952 where they raised their three children and spent the remainder of their lives together. Sara was a long time member of the Church of the Holy Communion where she was an active member of the Church, participating in various guilds including serving as head of the Altar Guild. She was also an early member of the Le Bonheur Club, and was active in The King’s Daughters, Les Passees and the Women’s Exchange. In addition to her family, she loved spending time at the beach, gardening and making batches of her highly acclaimed pimento cheese and cheese straws which she enjoyed sharing with family and friends. Sara was predeceased by her husband of thirty-five years, Robert “ Bob” Baird, who died in 1982, her daughter, Sara Baird Campbell and her brother, Jimmy Lear. She leaves two sons, Jim Baird of New Orleans, and Rob Baird (Vicki) of Memphis. She also leaves four grandchildren, Elizabeth Baird and Rob Baird both of Austin, TX, Lawrence Campbell of Memphis and Robert Campbell (Jaynie) of Virginia Beach, VA. Her first great granddaughter, Jessica Sarah Campbell, was born earlier this October. In lieu of flowers, memorials may be sent to Church Health, 1350 Concourse Ave, Memphis, TN 38104 or the Church of the Holy Communion, 4645 Walnut Grove Rd. Memphis, TN 38117. A family only service celebrating Sara’s life will be held in December with her ashes being placed in the Church of the Holy Communion Columbarium.

Sara &#8220;Stig&#8221; Lear Baird, wife, mother, grandmother, sister, aunt and friend died peacefully October 31, 2019 at the Village of Germantown where she was a resident. She was born March 14, 1924 in Greenwood, MS the daughter of the... View Obituary & Service Information

The family of Sara "Stig" Lear Baird created this Life Tributes page to make it easy to share your memories.

Send flowers to the Baird family.