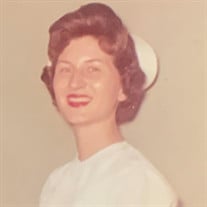 Shirley Wilbourn Starr passed away peacefully on August 11, 2021 at the age of 85, surrounded by family. Shirley enjoyed a long, happy life and will be remembered as a beautiful, smiling, sweet and deeply caring wife, mother, grandmother, sister and aunt. Shirley was born in Coffeeville, Mississippi on October 22, 1935, the first of five children, to Merle and Parks Wilbourn. After graduating from Coffeeville High School, she moved to Memphis to attend the Baptist Memorial Hospital School of Nursing, embarking on a 50-year nursing career that would define her adult life. It was in her role as a nurse that Shirley met Stanley Starr in 1959, as she cared for Stanley’s mother at Baptist Hospital. Shirley and Stanley were married on September 3, 1961 and were happily married for nearly 60 years. Together they raised two children, Marlon Starr (Becky), now of Atlanta, and Keely Starr (James) of Memphis. Throughout her life, Shirley placed a huge emphasis on family. She relished her role as wife, mother, and particularly as grandmother to Michael and Shelby Starr, who were the center of her universe. Shirley is also survived by three sisters, Sally Wilbourn of Memphis, Carol Morgan of Okolona, Mississippi, and Judy Jones (Mike) of Winona, Mississippi, a brother Mack Wilbourn (Carol) of Coffeeville, Mississippi, sister-in-law Elaine Roth of Boston, and many nieces, nephews and cousins whom she loved deeply. A graveside funeral service will be held at the Temple Israel Cemetery, 1660 Hernando Rd., Memphis at 9:00 am on Friday, August 13, with a short reception afterward at the Levy-Cooper Chapel on the cemetery grounds. In lieu of flowers, the family requests memorials be made to the charity of the donor’s choice.

Shirley Wilbourn Starr passed away peacefully on August 11, 2021 at the age of 85, surrounded by family. Shirley enjoyed a long, happy life and will be remembered as a beautiful, smiling, sweet and deeply caring wife, mother, grandmother, sister... View Obituary & Service Information

The family of Shirley Wilbourn Starr created this Life Tributes page to make it easy to share your memories.

Send flowers to the Starr family.