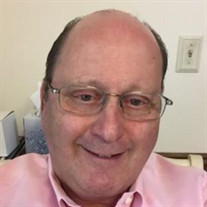 Stewart P. Cannell, born February 13, 1952, son of the late Jean and Daniel Cannell, passed away peacefully with his loving wife, Dee Cannell, at his side on January 22, 2022, at the age of 69. He leaves his brother, Dr. M. Barry Cannell (Rene Lewis), sister, Judy (Stan) Weiss, children Carey Saunders (Jason), Laurie Mehlman (Ross), grandchildren Sophie, Carter, and Olivia, his brother and sister-in-law, Diane and Irwin Evans, as well as a host of nieces, nephews, cousins, countless dear friends and colleagues. Stewart, born in Chicago, moved to Nashville, Tennessee, and lived there thought his teenage years. He was very involved with family and friends and began his long career with the B’nai Brith Organization. His accomplishments were many, including the highest honor of Regional Aleph Godol from 1969-1970. Cannell graduated from Hillsboro High Scholl in 1970. He then attended the University of Tennessee Knoxville graduating in 1974 with an undergraduate degree in communications. During college, he continued his involvement as a member and leader of the Alpha Epsilon Fraternity becoming a life member in 1974. It was during that time that he met the love of his life, Dee Evans, whom he married in 1975. His professional career began with an advertising firm in Nashville, Tennessee and soon thereafter, he transitioned to outside sales. His true calling was in sales, manufacturing and management in the label industry, beginning with Wurzburg Brothers and completing his career with All American Label. Throughout his professional career, he continued his philanthropic volunteering by mentoring countless teens on how to maneuver forward in their teenage years for over 30 years. In 2008, he was awarded one of the highest honors from the Cotton State Region of the B’nai Brith Organization for his unselfish volunteer work. At the same time, he continued his involvement with his peers in the B’nai Brith Men’s Lodge where he was honored with the President’s Award in 1997, 1998, 1999, 2000 and 2001. While his life was taken much too soon, he was blessed with the riches of a wonderful family, countless friendships and relationships made. A quiet, compassionate soul, who will always be remembered as a gentle giant, so caring and who will be greatly missed. The family requests that any memorials be sent to B’nai Brith Youth Delta Region (https://BBYO.org/donate), Temple Israel, or to the charity of the donor’s choice. May his memory be for a blessing.

Stewart P. Cannell, born February 13, 1952, son of the late Jean and Daniel Cannell, passed away peacefully with his loving wife, Dee Cannell, at his side on January 22, 2022, at the age of 69. He leaves his brother, Dr. M. Barry Cannell (Rene... View Obituary & Service Information

The family of Stewart P. Cannell created this Life Tributes page to make it easy to share your memories.

Send flowers to the Cannell family.