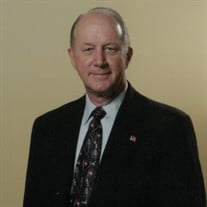 Stewart E. Williams June 21, 1935 – July 20, 2020 Stewart Edwin Williams, 85 of Germantown, Tennessee, passed away on July 20, 2020. Stewart, the son of Haydn and Louise Williams, was born June 21, 1935 in Pittsburgh, Pennsylvania. Stewart married his college sweetheart, Nancy B. Loomis of Canton, Ohio, on December 27, 1958. Stewart graduated from Poland Seminary High School in 1953 and attended Miami University in Oxford, Ohio where he earned a bachelor’s degree in business. At Poland, Stewart was active in football, basketball and track & field events. While at Miami, he had a job and was a very active member of the Delta Tau Delta Fraternity. After Miami University, Stewart entered The United States Marine Corps. While stationed at Camp Pendleton in Oceanside, California, Stewart served as the Fire Direction Officer for the 11th Marines, 1st Marine Division. Stewart and Nancy’s first son Mark, was born at Camp Pendleton in 1960. Their second son Keith followed in 1962. Stewart and Nancy raised two fine boys. Following the Marine Corps tour, Stewart spent thirty-eight years in the paper industry with three different companies. During that time, Stewart held positions in sales, marketing and plant management. Stewart was very active during his working and retirement years. He was an Eagle Scout and helped Scouting for over 40 years. He served as an Elder and Deacon in many of the churches at which he and Nancy were members. Stewart was active in The Marine Corps League and the National Society of the Sons of the American Revolution. He also served on the Board of The Habitat for Humanity. Stewart enjoyed family activities including traveling and reunions. He loved spending time with and working with his sons in Scouting, Little League Baseball and water activities. He enjoyed tennis, golf, photography and reading. Stewart is survived by Nancy, his loving wife of 62 years, daughter’s-in-law, Anna and Virginia, grandchildren Alessandra (Simone), Jason (Jen) and Jessica (Zachary), five great-grandchildren, Martina, Cristian, Quinn, Chase and Evelyn, his sister Jane (Donald) Kelly, and many extended family members who loved him dearly. Stewart was preceded in death by his parents and his sons, Mark and Keith. A Celebration of Life will be held at The Tennessee State Veterans Cemetery in Memphis, Tennessee. In lieu of flowers, donations in Stewart’s honor can be made to The Foundation for The Village of Germantown, 7820 Walking Horse Circle, Germantown, Tennessee 38138 or the Riveroaks Reformed Presbyterian Church, 1665 S. Germantown Road, Germantown, Tennessee 38138.

The family of Stewart Edwin Williams created this Life Tributes page to make it easy to share your memories.