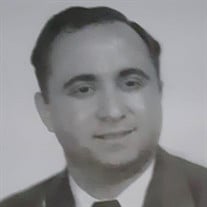 Stuart Jerome LaVene, 92, of Memphis, TN, passed away peacefully on Monday October 25, 2021. As a teenager, he was elected president of the Temple Israel Junior Congregation. He was a track star at Central High School and participated in many running events, winning first place in the 4 man relay in the State Of Tennessee High School track and field competition in 1946. After graduating high School in 1947, he attended Memphis State College. He graduated with a degree in Business Administration. Then, he enlisted in the U.S. Army. He served 4 total years, with 2 of those years in South Korea as an ammunition depot distributor. He was honorably discharged at the rank of Sergeant First Class in 1954. After his service, he married Sylvia Fleischer and worked as a bookkeeper for Harlem House Restaurants. Soon, he found a better position as a bookkeeper for Binswanger Glass Co. In 1955, he purchased Julius Brod's Tailoring Shop and was a tailor with 2 alteration employees. Using income derived from that, he also started he own company the same year called Ad-Craft Products Co. He operated that business for 55 years. He was a past president Sam Schloss B'nai B'rith Men's Lodge, as well as a past president of the Mid-South Specialty Advertising Association where he also served as treasurer for many years. He was a lifetime member of the American Legion and the Veterans Of Foreign Wars. His favorite hobby was dancing with his wife Sylvia, where they were often known for many years as one of the best Tango dance couples in Memphis. He was proceeded in death by his parents, Charles and Beatrice LaVene, and a 3 week old baby sister named Betty Irene LaVene, all of Memphis. He also leaves his wife Sylvia Fleischer LaVene, 3 sons, Dr. Daniel LaVene (Jan) of Longwood, FL, Edward LaVene (Amy) of Memphis, Mark LaVene of Memphis, and a daughter Linda LaVene Blumen (Sam) of Plano, TX. He is survived by 5 grandsons, 1 granddaughter, 2 great granddaughters, and 1 great grandson. He will be fondly missed by all of his family, friends, and peers.

Stuart Jerome LaVene, 92, of Memphis, TN, passed away peacefully on Monday October 25, 2021. As a teenager, he was elected president of the Temple Israel Junior Congregation. He was a track star at Central High School and participated in many... View Obituary & Service Information

The family of Stuart Jerome LaVene created this Life Tributes page to make it easy to share your memories.

Send flowers to the LaVene family.