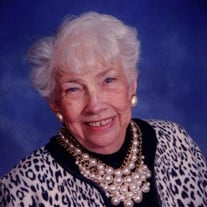 Sue Rootes Reid Williams passed away on July 16, 2020 at her home. Born May 19, 1924, Sue was a life long Memphian. She lived her entire life at her home on Stonewall, which had been built by her Grandmother, Shan Taylor Rootes, in 1910. Sue grew up with her extended family on Stonewall with her grandmother, her mother and father (Sue Demaris and Neil Gordon Reid), and her aunt and uncle (George and Mary Rootes). She was an only child and was doted on by all. Her mother was married in the house and Sue also was married there in 1964 to the love of her life, Robert K. Williams. Robert, an architect, predeceased her in 1982. Sue had a deep connection to her city and neighborhood. She served in various roles in the Evergreen Historic District Association and as Secretary for the Historic District Alliance. Notably, her leadership proved invaluable in helping to preserve the Evergreen Neighborhood. She worked to stop the proposed I-40 expressway expansion that demolished hundreds of houses through the neighborhood. After that plan was halted, she worked to get historic zoning to guide the rebuilding. The beautiful blending of the old and new that characterizes the current neighborhood is a testament to her efforts. This, along with her many other efforts to enhance and beautify Midtown Memphis, was recognized by her selection to the 1996 class of Leadership Memphis. Sue’s interests were broad and varied. With her husband Robert, she shared a deep passion for architecture and genealogy. Her insatiable curiosity extended well beyond this to the arts, fashion, history, books and libraries, gardening, travel, and poetry. Her early education at a small Midtown schoo l— “Miss Emma’s” — left an indelible mark on her. There she read and memorized classical literature and was immersed in famous plays and operas. This knack for memorization stuck with her for the rest of her life as she could effortlessly recall an appropriate quote or verse for any occasion. She graduated from Central High School in 1941 and after a brief time at Memphis State embarked on a long and varied career in advertising. After stops at Goldsmith’s, Lowenstein’s, Plough, the Cotton Council, and Sears, Sue settled in at the Julius Lewis Department Store where, after 15 years, she retired as the Director of Advertising. She often said that she made her living with her imagination; and it was this imagination that made her life so fulfilling. During her working career, she saved her pennies and traveled extensively — before traveling became commonplace -- and even traveled alone through Europe and South America. After she married Robert, they traveled to many of the places where he served during World War II with the 82nd Airborne Division including Normandy where he was a glider pilot during the D-Day invasion. Sue served as a volunteer in other capacities including as President of the Friends of the University of Memphis Library, a member of the Women’s Exchange, a long time member of the Midtown Garden Club, a docent at Elmwood Cemetery, an honorary member of the Memphis Ad Federation and a member of the King’s Daughters The most important aspect of life for Sue was her faith. She was a life-long Presbyterian and was a member of Evergreen Presbyterian from birth. There, she was an ordained Elder, the first woman to serve as Clerk of the Session and served as Chairman of the Board of Trustees. She also served on many church committees, taught Sunday school, and was the Church librarian. A student of theology, Sue was a sought after teacher in the Church, yet her faith was very simple, comfortable and unwavering. In recent years, she joined Idlewild Presbyterian to be near her family. Sue leaves behind her cousins Emily Bishop, Julie Mitchell, John Henley Cottrell and Grace Gorell. She is also survived by her sister-in-law, Sue O.Williams, her nephew Alex Williams (Cindy) and their sons Reid and Jordan, her niece Cecile Leggett (David) and their children Caitlin and Will and her nephew Edward Lee Williams (Goy) and their daughter Sarah. Throughout her life, Sue made long lasting strong friendships. She considered Niel Prosser, the son of one of her very good friends, as her son. When he married, she also “adopted” his wife Sarah and later their son Nathan along with Niel’s nieces, Michelle, Alysia and Reneé Prosser who considered Sue their grandmother. Sue had a host of other members of her “love family” who all feel very fortunate to have known her and feel a strong kinship with her. There are too many to mention, but a few that have been especially close are Gloria Pickett, Charles Chandler, Ruth Hendrix, Rick Marcus, Bill Graves and Emily Adams Keplinger. Memorials can be sent to Evergreen Historic District Association, Elmwood Cemetery, Idlewild Presbyterian Church, or the charity of your choice.

Sue Rootes Reid Williams passed away on July 16, 2020 at her home. Born May 19, 1924, Sue was a life long Memphian. She lived her entire life at her home on Stonewall, which had been built by her Grandmother, Shan Taylor Rootes, in 1910. Sue... View Obituary & Service Information

The family of Sue Reid Williams created this Life Tributes page to make it easy to share your memories.