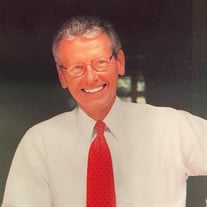 On Tuesday, June 23, 2020, Taylor (Nick) Nickles French loving husband and father of two sons, passed away at the age of 81. Nick was a long-time resident of Memphis, but lived in Santa Fe, NM and Little Rock, AR and returned to Memphis six years ago. Nick was born on April 26, 1939 in Memphis, TN to Ned and Helen French. He grew up in Memphis and graduated from Central High School in 1957. While attending the University of Oklahoma, Nick met the love of his life, Gail Little French of Oklahoma City, OK and completed a Bachelor of Arts in English and minor in Philosophy. After marrying Gail, Nick ventured to the University of Mississippi and then Memphis State University to finish a Juris Doctor. Nick had a passion for the southwestern United States, particularly New Mexico, where he loved the culture, art, people, food, and scenery. Many wonderful family experiences were enjoyed and lifelong friendships were cultivated in Santa Fe. Gail and Nick were fortunate to have traveled to many parts of the world. Nick and Gail successfully operated French and Co. real estate company for over 35 years in Memphis. Together, they consistently brought grace, style, and sincere conversations to the world. We all remember the wonderful and detailed celebrations that Nick and Gail planned and orchestrated, as they loved to cook and entertain with friends and family. Everyone remembers the very potent Nick’s (Egg) Nog lovingly prepared each Christmas. Nick was quite active at the local, state and national levels of real estate. Accomplishments include: President of the Tennessee Board of Realtors and President of the New Mexico Board of Realtors. In the Memphis Area Association of Realtors, Nick was a Life Member Multi-Million Dollar Club and received the Lifetime Achievement Award. Further, Nick found mentoring others to be very rewarding. Examples of involvement within the Memphis community include chairman of Memphi, the oldest Krewe in Memphis, president of Carnival Memphis, a volunteer with Memphis City Beautiful Commission and Le Bonheur Club, and layman with Calvary Episcopal Church and St Mary's Episcopal Cathedral. We offer a special thanks to the expert attention provided by the medical teams at Germantown Methodist Hospital and West Cancer Clinic. Nick was preceded in death by his father, Ned, his mother, Helen, and his beloved wife Gail. He leaves his son Ned Mims French II and his children with Lori Plunk French, Austin Nickles French and Carson Kenneth French, and son Taylor Nickles French, Jr. and his wife Tracy Lambert French, and granddaughter Abigail Jean French. Nick was known for his quick wit, discerning eye, and spiritual nature and holding himself and others to very high standards. Nick taught us about making decisions and the ability to recognize the benefits and risks therein. Further, he said not to settle or lower your expectations, even if you are weary from waiting; and never give-in just because you are tired. In his workspace at home, he pasted a quote on a bookcase, “Your playing small does not serve the world, Jan. 28, 2015.” Like his father Ned, Nick taught us that age was only a number. We will always remember Nick’s passion for the underdog, laughter, and for Gail. After Gail passed away, he would maintain fresh flowers, typically Alstroemeria, at her bedside. Everyone who remembers Nick is asked to celebrate his life in their own way, and we suggest that raising a glass of their favorite beverage in his memory would be most appropriate. A funeral service will be held at Calvary Episcopal Church in Memphis, TN at 2 pm, Sunday, June 28th, 2020, and live-streamed at https://calvarymemphis.org/worship-2/livestream/. Memorials can be made in Nick’s name to Le Bonheur Children's Hospital, Calvary Episcopal Church, St Mary's Episcopal Cathedral, and Memphis Symphony Orchestra. Please Note: Face masks will be required of all attendees. There will be limited seating for social distancing.

On Tuesday, June 23, 2020, Taylor (Nick) Nickles French loving husband and father of two sons, passed away at the age of 81. Nick was a long-time resident of Memphis, but lived in Santa Fe, NM and Little Rock, AR and returned to Memphis six... View Obituary & Service Information

The family of Taylor "Nick" N. French created this Life Tributes page to make it easy to share your memories.

Send flowers to the French family.