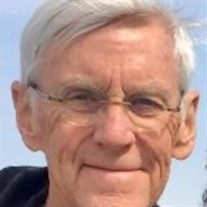 Terry Melvin Bishop of Memphis, TN passed away peacefully on July 11, 2021, surrounded by family at his home. He was born in Enid, OK on October 5, 1944 to Lucille Dawkins Bishop and Melvin Lester Bishop and spent his youth in Michigan and New York where he was active in multiple team sports. He achieved the rank of Eagle Scout in the Boy Scouts of America. Terry served his country in the U. S. Air Force for four years, including a year in Vietnam, and he received his undergraduate and master’s degrees from the State University of New York at Buffalo. His career brought him to Memphis, where he raised his children. Terry was a former President of Memphis Kiwanis and at the time of his retirement was a Registered Financial Advisor at Wells Fargo Advisors. For almost twenty years, Terry was an active member of Germantown Presbyterian Church where he served as a Ruling Elder and on numerous committees. He was involved in organizing and traveling to Russia on mission trips and was instrumental in starting the Men’s Bible Study Breakfast, which continues to this day. At his passing, Terry was a faithful member of Idlewild Presbyterian Church in midtown Memphis and enjoyed being active in Christ the King Episcopal Church in Santa Rosa Beach, FL. He loved running - especially on trails - and was affectionately nicknamed “Trail Pope”. Terry completed numerous races including marathons, 50ks, and a 50 miler and in 1981 was considered to be the first person from Memphis to complete the Pikes Peak Marathon. He said that one could solve life’s problems while running. Another favorite pastime was reading, generally in pursuit of intellectual and spiritual growth. After they retired, Terry and his bride enjoyed traveling to various parts of Europe, North America, and to Israel. Terry is survived by his loving wife of 32 years, Carol Johnson Bishop; children: Benjamin Bishop of Knoxville, TN; Jessica Bishop Stone of Virginia Beach, VA; William Estes (Lisa) of Fort Worth, TX; and Cullen Estes (Jennifer) of Marion, AR; grandchildren: Noah, Ingrid, Fynnegan, and Magnolia; Jordyn, Harrison, Jackson, Bryant, Stuart, Morgan, Mharie, Liam, and Patrick; and five great-grandchildren. Memorial Service will be 3:00 pm Friday, August 6th at Idlewild Presbyterian Church, with a reception to follow the service in Montgomery Hall. Burial will be private. In lieu of flowers, please consider making a donation to Idlewild Presbyterian Church or to a charity of your choice.

Terry Melvin Bishop of Memphis, TN passed away peacefully on July 11, 2021, surrounded by family at his home. He was born in Enid, OK on October 5, 1944 to Lucille Dawkins Bishop and Melvin Lester Bishop and spent his youth in Michigan and... View Obituary & Service Information

The family of Terry M. Bishop created this Life Tributes page to make it easy to share your memories.

Terry Melvin Bishop of Memphis, TN passed away peacefully on...

Send flowers to the Bishop family.