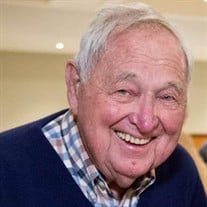 Thomas Elliot Nix (Tom) passed away on Wednesday, April 22nd at his home. He is survived by his wife of 69 years, Anita Bursi Nix, and daughter Lisa Nix Maddox (Jim) of Memphis. He leaves behind three grandchildren, Jim Maddox Jr and Will Maddox of Memphis, and Camille Hieronymus of Mobile, AL, and five great grandchildren. Tom was born in Oma, MS, on October 19, 1926 to Walter Lowery Nix and Inda Anna Nix. As a young boy, growing up in rural Mississippi, he spent his days helping around the family farm and playing with neighboring children, hunting and trapping small game animals and swimming in the creeks around his home. Tom’s love of hard work was evident at a young age, successfully coaxing his father to allow him to farm, on his own, a small piece of land near their home with a team of mules and a plow. In 1943, at 17 years old, Tom signed up for service in the U.S. Marine Corps and fought courageously in World War II. He served in an infantry unit and carried the Browning Automatic Rifle (BAR). After joining his division on Guam, Tom’s unit landed and fought valiantly during the Battle of Iwo Jima. After the end of the war, he helped to peacefully move many Japanese citizens that had immigrated to China back to Japan. When he acquired enough credits to return stateside, Tom was discharged from his service and returned home to Mississippi. Tom enrolled in Holmes Junior College in the fall of 1946. He ran track and excelled in football, eventually earning a scholarship to play at Memphis State (U of M). There he met his loving wife, Anita Bursi, and they were married in 1951. He was an outstanding lineman for the Tigers and would later be named to the All-Time Tiger Team, 1924-1958. After receiving his bachelor’s degree from Memphis State, he pursued a career in teaching, that quickly led to coaching football. After spending a few years at Whitehaven High School as a Physical Education teacher, he became the head football coach. Tom joined the coaching staff at Christian Brothers High School (Formerly CBC) as the head coach in 1956, a position he held until 1984 when he took over as the Athletic Director. Coach Nix helped create an incredible tradition of winning at CBHS, compiling a record 239-79-7 (214 wins at CBHS), and retired as the winningest coach in TSSAA history. Nix’s teams won nearly 20 City, County, District, and Regional Championships, including the 1977 TSSAA State Championship, a game that ended on a miracle quarterback throwback caught in the endzone. Coach Nix consistently attributed his unbelievable success to the hard work and talent of his assistant coaches, and the dedication of his players. He also helped coach in some capacity other sports at the school, including basketball, wrestling, and track and field, among others. Many may remember the fun and exciting summertime All-Sport’s Camp, where competition and storytelling were a tremendous hit. Off and on he worked with teams throughout the last 20 years, including the 2002 freshman football team. He was reinvigorated in coaching by the track team in the late 2000s, assisting Head Coach Carl Brock to an overall state title. Tom loved his family, and especially his grandchildren. Jim, Will, and Camille cherish the memories of board games and story time with Papa and Grammy. He was a tremendous storyteller and they loved hearing the favorites like “Bid Red” and “The Man with the Golden Arm”. Along with Anita, he enjoyed spending time at Horseshoe Lake, AR, where countless days were spent fishing, playing, and boating around the lake with family. Parishioners at St. Louis Catholic Church, his strong faith was grounded by his rock, Anita. He loved to attend the Saturday evening mass at the Brother’s residence on campus, as he always felt like the Christian Brothers were a part of his family. During his twilight years, Tom spent numerous weekends working with his son-in-law, Jim Maddox, at their family hunting camp in Hughes, AR, remodeling the house and doing whatever he could to stay busy. Tom was a regular coffee drinker at Panera Bread in Laurelwood, and one could always find him there in the afternoon holding court talking sports and politics with friends and anyone else that happened to be there. Coach Nix was surrounded my numerous caregivers throughout the final years of his life, and we want to thank those ladies that dedicated their time and effort to making him happy and comfortable. We would also like to thank Dr. Robert Kraus, whose dedication and love for Coach Nix added many years to his life. He loved people, and they loved him back. He never hesitated to ask a young man, “Do you know where you are going to high school? You ‘ought to try the Christian Brothers. You won’t regret it!” Coach Nix was an inspirational leader, and his legacy will not be defined by wins and losses, but by the lives he inspired and the life successes of the young men he called “Brother’s Boys”. Due to the ongoing pandemic and city stay-at-home order, burial services will be restricted to family members only. Upon the conclusion of our current social distancing guidelines, a celebration of life service will be scheduled and held for the public. A public memorial procession will be Friday April 24th beginning at 7:30pm past the front gate of Tom Nix Stadium at Christian Brothers High School.

Thomas Elliot Nix (Tom) passed away on Wednesday, April 22nd at his home. He is survived by his wife of 69 years, Anita Bursi Nix, and daughter Lisa Nix Maddox (Jim) of Memphis. He leaves behind three grandchildren, Jim Maddox Jr and Will... View Obituary & Service Information

The family of Thomas Elliott Nix created this Life Tributes page to make it easy to share your memories.

Send flowers to the Nix family.