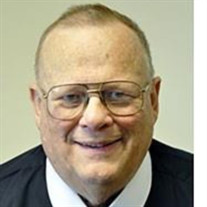 MEMPHIS, TN - Brother Walter Schreiner FSC, age 76, passed away in Memphis on February 16, 2022. Brother Walter was born in St. Paul, Minnesota where he attended Hill High School. He received his B.A. and M.A.T. from the University of St. Thomas, his M.A. from the University of Notre Dame and his Ph.D. from the University of Illinois in Champaign, Illinois, all in his first love, mathematics. Brother Walter entered the De La Salle Christian Brothers as a teacher at Grace High School in Fridley, Minnesota in 1968. There he began his life-long career as a mathematics teacher, coach and as Athletic Advisor and Director to young students. He taught at Cretin High School in St. Paul for seventeen years, at De La Salle High School in Minneapolis for four years, St. Mary’s University in Winona for four years and at Christian Brothers University in Memphis from 2000 to 2022. A strong advocate for athletic academic achievement he served for over 20 years as the athletic advisor to student athletes and when possible, even in his wheelchair, he attended as many athletic competitions as possible to cheer them on the field and support their academic work in the classroom. His parents Helen and Walter James Schreiner, Sr. proceeded him in death. He is survived by two sisters Mary (Joseph) Fitzharris, Barbara (Karen Colton) and one brother Bill (Barb) and his fellow Christian Brothers of the Midwest District and his Lambert Hall Community on the campus of Christian Brothers University in Memphis. Visitation will be at Canale Funeral Home on Union Avenue Extended on Friday February 25 from 5:00 PM. until 7:00 PM. with rosary at 6:30 PM. Funeral Mass will be at the Cathedral of the Immaculate Conception, Central Avenue, Memphis, TN on Saturday, February 26 at 10:00 AM with interment to follow at Calvary Cemetery, Memphis. In lieu of flowers, donations may be made to the Brother Walter Schreiner Memorial Fund at Christian Brothers University, 650 E. Parkway S., Memphis, TN 38104 and/or Christian Brothers of the Midwest, 7650 S. County Line Road, Burr Ridge, IL 60527.

MEMPHIS, TN - Brother Walter Schreiner FSC, age 76, passed away in Memphis on February 16, 2022. Brother Walter was born in St. Paul, Minnesota where he attended Hill High School. He received his B.A. and M.A.T. from the University of St.... View Obituary & Service Information

The family of Brother Walter James Schreiner FSC created this Life Tributes page to make it easy to share your memories.

Send flowers to the Schreiner family.