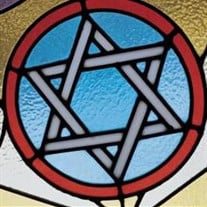 Warren Kramer was born in Nuremberg, Germany on July 31, 1924. As many have heard his story which he loved to share, he left Germany for England on a Kindertransport at the age of 15. He remained in England during the war, where he learned the trade of printing which became his lifelong profession. As soon as he was eligible he volunteered for the British army where her served even after the war ended. His parents survived Theresienstadt concentration camp, and Warren reunited with them in New York,at the age of 23. He married Ellie (nee Neuberger) who also happened to be from Nuremberg, in April 1954. They were married for 39 years. Over the course of the past decade, Warren has spoken on numerous occasions at various venues, sharing the miraculous stories of his life. He even spoke on the Saturday night prior to his passing on November 9, at an event, “Remembering Kristallnacht with Warren Kramer.” Warren had a zest for life. He loved goodness, kindness and truth. He seized any opportunity he had to attend Torah classes and cultural events. He connected to people from all walks of life, and inspired many with his positive attitude and warm personality. He was determined to be both physically and mentally active. He is known for walking long distances at his own pace, in recent years, and always liked to have a destination. He loved traveling throughout America and Europe, and especially loved to visit his family in Israel. He kept his mind active doing crosswords daily as well as doing Sudoku and playing computer games. He attended JCC exercise and activities with the seniors daily, where he was well loved, and known for sharing a daily joke, as he loved to make others smile and share a laugh with him. Warren passed away Wednesday, November 13, the 15th of Cheshvan, at the age of 95. He, himself an only child, leaves 2 daughters, Evelyn (Dr. Robert Moskowitz), and Adina (Cantor Aryeh Samberg), and a son Mordechai who lives in Jerusalem, 21 grandchildren and 35 great grandchildren including a great grandson born just a few days after his passing. He leaves a wonderful name and legacy and will live on in the hearts of his family and many friends. The family requests that any memorials be sent to Anshei Sphard Beth El Synagogue, or a charity of the donor’s choice.

Warren Kramer was born in Nuremberg, Germany on July 31, 1924. As many have heard his story which he loved to share, he left Germany for England on a Kindertransport at the age of 15. He remained in England during the war, where he learned the... View Obituary & Service Information

The family of Warren Martin Kramer created this Life Tributes page to make it easy to share your memories.

Send flowers to the Kramer family.