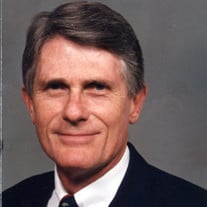 William J. "Bill" Adams died peacefully in the presence of family on Thursday, February 6. Bill was born December 16, 1934, in Amarillo, Texas, and graduated from Amarillo High School. He went on to graduate from Yale University in 1956 where he was a fellow of Calhoun College. He loved and played the game of baseball throughout his school career and maintained a lifelong interest in the game. During his working career, Bill was involved in grain merchandising, starting with Cargill. Inc, and including Cook Industries and Tradigrain, Inc. His work took him to many different cities in the US as well as to Tokyo, Japan, where he opened Cook's first Far East grain operation. He served as president of the North American Export Grain Association as well as President of Tradigrain, USA. He was well-known within the business for his honesty and integrity. His retirement from Tradigrain in 2000 was celebrated with gatherings of friends from the grain export industry in Europe and Japan as well as Memphis. Memphis eventually became Bill's home, as his business interests brought him here on several separate occasions. He served the community as a member of the advisory board of the Memphis Art Academy as well as a board member of Concerts International. He was a communicant of Church of the Holy Communion where he served on the vestry, taught Sunday School, and coached basketball. Bill met his wife, Sylvia, at summer camp in New Mexico when they were in their teens. Bill was a super-organizer, sometimes being able to find obscure documents from vast files he kept on business associates and trips. He created scrapbooks for each of his children featuring his own drawings as well as collected cartoons. He loved all the family Corgis, especially Ollie and Bobby. Survivors include his wife of sixty-three years, Sylvia, and three children: Brad Adams (Mary Pat) of Oneida, New York, Stuart Adams (Deborah) of Chicago, and Karen Adams (Edward O'Brien) of Memphis. He also leaves eleven grandchildren and four great-grandchildren. Services will be Monday, February 17, at 1 pm in St Edward Chapel at Trezevant. A visitation and reception will follow in the Great Hall at Trezevant. Memorials may be addressed to the Trezevant Foundation or to the Church of the Holy Communion.

William J. "Bill" Adams died peacefully in the presence of family on Thursday, February 6. Bill was born December 16, 1934, in Amarillo, Texas, and graduated from Amarillo High School. He went on to graduate from Yale University in 1956 where... View Obituary & Service Information

The family of William "Bill" J. Adams created this Life Tributes page to make it easy to share your memories.

Send flowers to the Adams family.