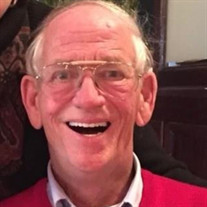 William “Hooper” Jones Jr. of Memphis made his final flight to his heavenly home on September 25, 2021. He was 71. Hooper graduated from Kingsbury High School in 1967 and the University of Mississippi in 1971. During his time at Ole Miss, Hooper was in the marching band, a member of the Scabbard and Blade military honor society and served as Commander of the Arnold Air Society. Hooper was also a proud member of Alpha Tau Omega Fraternity. Following graduation, Hooper was commissioned as a Second Lieutenant in the United States Air Force. He graduated from pilot training in July 1972 at Columbus Air Force Base where he met the love of his life, the former Judy Rudy. After receiving his wings, Hooper moved back to Memphis and joined the Tennessee Air National Guard (TNAG) where he served full time from 1979-1988, flying the C-130 Hercules. Hooper cherished his time serving in the TNAG with many memorable friendships and experiences. When Sandinistas overthrew the Nicaraguan government, he flew in under gunfire to evacuate the last of the U.S. embassy, earning him a key to the City of Memphis. A movie would later be made about the evacuation called, “The Last Plane Out.” Hooper would retire from the Guard with the rank of Lt. Colonel. In 1988, Hooper joined United Parcel Service (UPS) where he flew DC-8s and 747s and served as a fight operations manager. Hooper was true Southern renaissance man with a wide variety of hobbies and interests. He loved to ride motorcycles and spending time at the Memphis Sport Shooting Association (MSSA) range. An avid tennis player and umpire, Hooper was named U.S. Tennis Association (USTA) Official of the Year in 2002. Hooper was active in the Memphis community, particularly Carnival Memphis. He served twice as chairman of the Grand Krewe of Sphinx and as King in 2011. He was named Les Passees Man of the Year in 2018 because of his tremendous service and love for others. To know Hooper was to love him. Whether he was walking into his regular diner, the Silver Caboose, Starbucks, the golf pro shop, the doctor’s office, or the Grove, someone would approach him with a big hug as if they had just seen an old friend…because they had. Hooper’s love of life and of his many friends was surpassed only by his love and devotion to his family. Hooper adored Judy with every ounce of his being. They were happily married for 49 years and created a beautiful life together. They loved spending time with their two children, “Trey” William Hooper Jones III (Laura Lee) and “Libby” Jane Elizabeth Zoghby (Jonathan) and five grandchildren, Ann Charlotte and Hooper Jones, and Jane, Ginger, and Margaret Zoghby. Hooper was one of the last children adopted through the infamous Tennessee Children’s Home in 1949 and is preceded in death by his adoptive parents, William Hooper Jones, Sr. and Dythula Griffin Jones. Patriot. Husband. Father. Grandfather. Friend. As the Air Force Motto says, Fly-Fight-Win. Hooper fought the hard fight and has won a place with his Heavenly Father. Fly high, Hooper! A celebration of his life will be held Friday, October 1, at Saint Andrew’s Episcopal Church in Collierville, Tennessee at 2 p.m. with visitation from 1-2 p.m. A reception will follow across the street at Simply Done. Donations may be made to Children’s Charities through Carnival Memphis, Les Passees of Memphis, or Saint Andrew’s Episcopal Church of Collierville.

William &#8220;Hooper&#8221; Jones Jr. of Memphis made his final flight to his heavenly home on September 25, 2021. He was 71. Hooper graduated from Kingsbury High School in 1967 and the University of Mississippi in 1971. During his time... View Obituary & Service Information

The family of William "Hooper" Jones Jr. created this Life Tributes page to make it easy to share your memories.

William “Hooper” Jones Jr. of Memphis made his final flight to...

Send flowers to the Jones family.