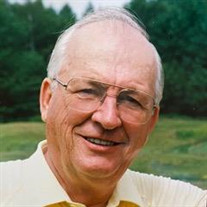 Dr. William Morehead, 89, slipped away November 28th. He entered this world December 31, 1931 in the family home in Memphis, Tennessee, the son of Turner G. and Marion Owens Morehead. Bill graduated from Central High School, Class of 49. He attended Mississippi State University and then it was on to medical school at the University of Tennessee, Class of 1955. He did his Internship and Residency at John Gaston Hospital in Memphis. Upon graduation, he married the love of his life, Patricia Riegle (Pat) and after serving Uncle Sam in the army at Pine Bluff Arsenal he took a position on the Presnell Hospital staff in Kennett, Missouri. He enjoyed his time in Kennett, but when Wayne Croom of Malden asked him to join his practice in 1963, he moved his growing family and made Malden his hometown for the next 50 years. His family practice grew as he delivered multi-generations of babies, stitched wounds, set bones, held hands, and always listened. He gave good news and bad news and carried his large black bag on house calls and rounds to the nursing homes. He was definitely the old time family doctor from years gone by. Bill spent many years in solo practice after Wayne moved and was always “on call” for his patients. This didn’t curtail his time for family and friends, though. He thrived on competition. He was an avid golfer beginning in his teens. He rolled in many putts both literally and figuratively in his life. Weekends you would find him in competition with his buddies at the Malden Country Club or in some tournament with his wife, Pat. He was a Life Master bridge player and Pat and Bill ran a local duplicate game as well as many evenings playing with friends in their home. He was Past President of the local Lion’s Club and the Country Club and served as the team physician for the Malden High School football team as well as doing physicals for other area sports teams. He loved games of any kind and especially enjoyed heading south to Tunica with Pat and son, Will in his later years. He had a love for literature and enjoyed poetry, especially Kipling. His grandchildren enjoyed listening to him read to them. He did enjoy a good limerick, as well. He followed his own advice- “The less said the better, it gives you time to hear what others are saying”. He was a man of few words, but many admirable qualities. His legacy will be his abiding love for his wife and family, integrity, respect for others, honesty, patience, kindness and dedication to his profession. “Doc” will be remembered and missed by many. In addition to his parents, he was predeceased by a sister, Sarah Moore and two brothers Turner Jr. and Robert Felder. Surviving in addition to his wife, Patricia (Riegle) Morehead is his daughter, Patricia Kilgore (Larry), sons William Jr. and Robert Morehead (Catherine) and daughter Elizabeth Morehead (Martin Hilton); eight grandchildren, Lauren, Travis and Joseph Kilgore, Turner, Henry and Hannah Morehead, and Eva and Noah Hilton and five great grandchildren, Bella, Josephine and Scarlett Anne Dixon, Charlie Jin Kilgore, and Harper Kilgore. One nephew Larry Morehead (Claudia) and niece Cathy Morehead (Jeffrey Picken) Sister-in-law Ausra Riegle, Nephews Chuck (Cynthia)and Chris Riegle (Helen) and niece Kristina (David Gram) and their families Funeral Services will be Saturday December 4th at St. John’s Episcopal Church 3245 Central Ave in Memphis. Visitation will begin at 10:00 am in the Parish Hall followed by the service at 11:00 am. Interment will follow the service at Elmwood Cemetery, 824 South Dudley Street, Memphis. Those who wish to remember “Doc” in a special way may make gifts in his memory to the Alzheimer’s Association, The Pat Summitt Clinic or a charity of choice.

The family of Dr. William Edward Morehead created this Life Tributes page to make it easy to share your memories.

Send flowers to the Morehead family.