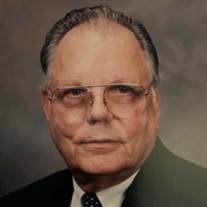 Bill Warnock entered this world on March 14, 1928 and left it a better place on October 13, 2020 for having shared his smiling blue eyes and his ready smile with us. Bill was the darling only child of Ernest and Frances Warnock. Ernest was a locomotive engineer, and as a boy, Bill loved traveling by train with his parents to visit family in the Midwest. As a result, Bill had a lifelong love of trains, which he shared with his children and grandchildren. Growing up, Bill delighted in making mischief in midtown Memphis, which provided wonderful stories of boyhood misadventures. He attended elementary school at Immaculate Conception, and he learned the value of discipline, via some hard knocks, from the brothers at Christian Brothers High School. He then served in the US Army in Korea in 1946. While he attended Memphis State College (now the University of Memphis), he enjoyed acting in school plays and the early Memphis Little Theater. He also used his vocal talents in radio in Memphis, TN and Forrest City, AR. His family loved traveling to Shiloh National Military Park to see a lean, young Bill play Gen. PGT Beauregard on horseback in the official National Park Service film reenacting the Civil War battle. After graduating from college, Bill worked as the personnel administrator for St. Joseph’s Hospital in Memphis. While working there in 1968, an attractive, (significantly) younger nurse from Oregon applied for a job. Bill ultimately (after several failed attempts) succeeded in getting a date with the nurse, Margaret Marticia Kofoed, and eventually convinced Margaret to marry him in March 1970. Bill adored and honored his bride for the next fifty years. Bill and Margaret raised their three children in a loving, fun home in Central Gardens. Bill instinctively prioritized his wife and children. He was the beating heart of his family. Bill coached T-ball and basketball for his children’s teams. He could reliably be found at his kids’ athletic games and even at most practices, often still wearing his suit, as he came straight from work. To the delight of his fellow team parents, Bill loudly harangued the referees for any call that went against his daughters’ volleyball, basketball or softball teams while they played for Grace St. Luke’s. Bill’s gentleness, humor, and kindness were second nature. For example, one afternoon while driving east on Union Avenue in midtown rush hour traffic in 1985, Bill saw two men come to blows on the sidewalk as the result of a minor traffic accident. Bill actually left his car in the street and intervened between the two strangers (one badly bleeding) to end the fight as his children watched, dumbfounded. He taught his children how to be a gentleman and a leader that day without saying a word. Bill and Margaret traveled most of the country and enjoyed visiting their family home on Netarts Bay, in Western Oregon. They traveled to Europe, Canada and Mexico with their family and their church, Union Avenue Baptist Church, where Bill was a member and deacon. Bill served on the Board of Directors of the Heritage Federal Trust credit union. Bill enjoyed a wonderful career as Vice President of Crittenden Memorial Hospital until his retirement in 1999, but Bill never really quit working. Instead, he helped raise his young grandchildren. Bill’s generosity and strength are the core of his surviving family members. Bill will always be cherished by his bride of fifty years; his children, Mary Frances Williamson of Memphis, TN (married to Jeff Williamson), Elizabeth Anne Warnock of New Orleans, LA (married to Bill Clements) and Bill Jr. of Charleston, S.C. (married to Ashley Warnock); and his six grandchildren, Grant, Sara and Allan Williamson; and William, Margaret and Peter Warnock. The family requests your presence at Calvary Cemetery on Saturday October 17, 2020 at 10:30 am for visitation. A graveside committal service will follow at 11:00 am. In lieu of flowers, the family suggests a memorial to a charity of the donor’s choosing.

Bill Warnock entered this world on March 14, 1928 and left it a better place on October 13, 2020 for having shared his smiling blue eyes and his ready smile with us. Bill was the darling only child of Ernest and Frances Warnock. Ernest was... View Obituary & Service Information

The family of William Richard Warnock created this Life Tributes page to make it easy to share your memories.

Send flowers to the Warnock family.